Pseudoscorpions are a common arachnid closely related to scorpions, mites, ticks and spiders, but th 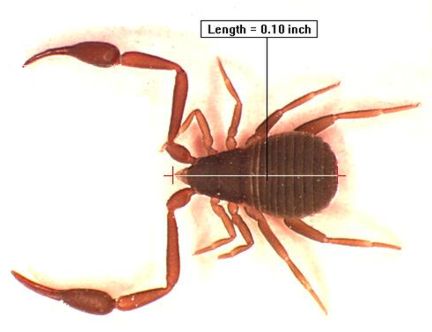 ey usually go unnoticed because of their small size. When they are noticed is when they accidentally invade homes and wander into sight or they have become trapped in the sink or tub and can’t get out.  They do not live in the drains.

Like other arachnids, pseudoscorpions have 8 legs. In addition, they have a pair of enormous pincers (called pedipalps) on the front of the body that gives them a strong resemblance to the true scorpions.  However, unlike scorpions, pseudoscorpions are very small, usually less than 5 mm long, and they have no sting on the end of their flat, oval abdomens. Natural habitats for pseudoscorpions include under leaf litter and mulch, in moss, under stones and beneath tree bark. They have also been reported in bird nests and between siding boards of buildings.

Pseudoscorpions are harmless and beneficial.  They are predators that feed on small insects, mites and their eggs.  They do not have a stringer and their "claws" are too small and weak to be hurtful to people and pets.

Only rarely are pseudoscorpions a chronic pest problem.  They cannot bite or sting and they do not attack the house structure, furniture or occupants. They may be an annoying nuisance, usually during the spring and summer, as an occasional "accidental invader" from outdoors.

Special treatments for control of pseudoscorpions are usually not warranted. Only in a persistent infestation should control be attempted. It would be difficult to prevent all invasion by pseudoscorpions but sealing gaps, cracks and other points of entry may help exclude them.  Pseudoscorpions discovered indoors can be vacuumed or swept up and discarded