The following are highlights and updates about samples and questions received in the Clinic during the past two weeks:

Several callers are asking about treating for bagworms. NOW is the time to be looking carefully at trees that were infested last year to see if small caterpillars are present. See the Horticulture and Home Pest News from May 20, 2009 for more information on treatment options. We are receiving mixed reports on whether or not the below-freezing temperatures last winter had any effect on survival. Therefore it is important to check each tree for the small, quarter-inch long caterpillars with bags. ISU Extension Crop Specialist Mark Carlton reported the best way he found to detect the small bagworms was to stand quietly and stare into the tree foliage. When a wiggling motion catches your eye, look closely and that will be the small bagworm. Thanks for the advice, Mark!

A reminder about moles: The main mole meal is earthworms! Insecticides that kill insects in the lawn (including white grubs that will not be present until later in the summer) will not impact moles. For more information on mole control, see the June, 2004 School IPM Newsletter or ISU Extension pamphlet PM1302B

EAB Look Alike: Keep those cards and letters and samples and digital images coming! Luckily, the samples received so far where someone thought they had found an emerald ash borer were sixspotted tiger beetles like the one in the photo below. See also the article later in this issue for an emerald ash borer update. 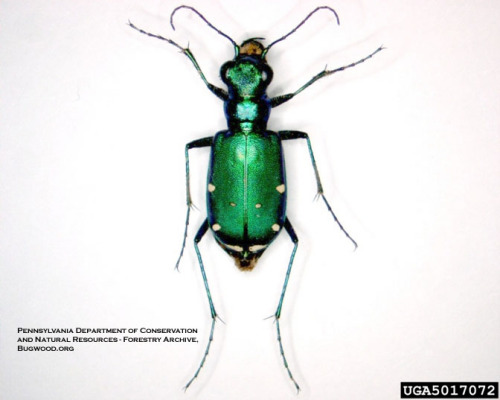 Links to this article are strongly encouraged, and this article may be republished without further permission if published as written and if credit is given to the author, Horticulture and Home Pest News, and Iowa State University Extension and Outreach. If this article is to be used in any other manner, permission from the author is required. This article was originally published on June 17, 2009. The information contained within may not be the most current and accurate depending on when it is accessed.