Hollyhocks are grown for the their showy, colorful flowers. A common disease problem on hollyhocks, called rust, can also lead to 'colorful' foliage. Puccinia malvacearum, the rust fungus that infects hollyhock, causes yellow spots on the upper leaf surface, and orange-brown raised pustules on the lower leaf surface. Orange pustules also form on the stems of the plants.

Wet conditions promote infection by the rust fungus. The lower leaves typically show symptoms first, and the disease slowly progresses to upper leaves over the summer. Infected leaves eventually turn brown, wilt, and die. Wind and splashing rain help spread the spores of the fungus, so spacing plants to promote good air circulation can help slow the progression of the disease. Because wet conditions favor infection, water the soil around the plants rather than wetting the leaves with overhead irrigation if possible.

Because the rust fungus survives from season to season on infected plants parts, cut back the plant stalks at the end of the season and thoroughly remove all of the stalks, stems, and leaves. The hollyhock rust fungus can also infect the common mallow weed, so weed control in the vicinity is important.

In most situations, these good gardening practices alone will not control rust completely. Fungicide applications can be used for additional disease management. Fungicides should be applied when symptoms are first observed and reapplied at approximately 7-10 day intervals. Be sure to read and follow the instructions on the label of the fungicide. You can find fungicide products at your local garden center. 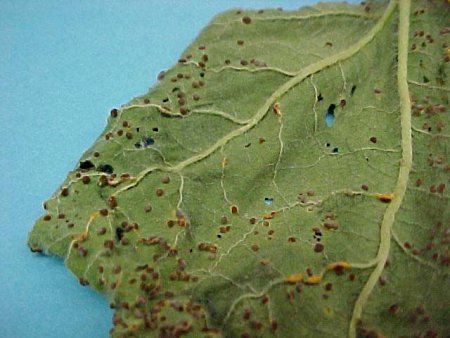 Links to this article are strongly encouraged, and this article may be republished without further permission if published as written and if credit is given to the author, Horticulture and Home Pest News, and Iowa State University Extension and Outreach. If this article is to be used in any other manner, permission from the author is required. This article was originally published on June 8, 2005. The information contained within may not be the most current and accurate depending on when it is accessed.