Fire Blight of Apple and Pear

Fire blight is a common springtime disease of apple, pear, and related species, including crabapple, hawthorn, cotoneaster, and quince. Leaves on affected branches wilt and turn black, appearing as if scorched by fire. The most characteristic symptom is the curling of affected shoots into curved "shepherd's crooks". Cankers (areas of sunken or discolored bark) may develop on limbs, and the blighted shoots may produce sticky ooze in wet weather.

Fire blight is caused by a bacterium. The bacterium survives the winter in cankers on infected branches. In the springtime, sticky bacterial ooze formed at the edges of the cankers is carried to healthy plants by insects, wind, and splashing rain. Healthy plants may become infected through blossoms or wounds.

Several management tactics can help reduce the impact of fire blight. Sanitation is most important, and infected branches should be pruned out of the tree. It is best to prune when the plant and bacterium are dormant, during the winter. Infected branches should be pruned at least 12 inches below the area that looks diseased, to remove all of the bacteria.

Resistant varieties should be planted whenever possible. Although they are not completely immune to fire blight, resistant varieties are less impacted by the disease than are other varieties. Pears tend to be more susceptible than apples.

Commercial growers can use bactericidal sprays, such as copper sulfate or streptomycin, during the bloom period. However, bactericides are ineffective without proper sanitation. 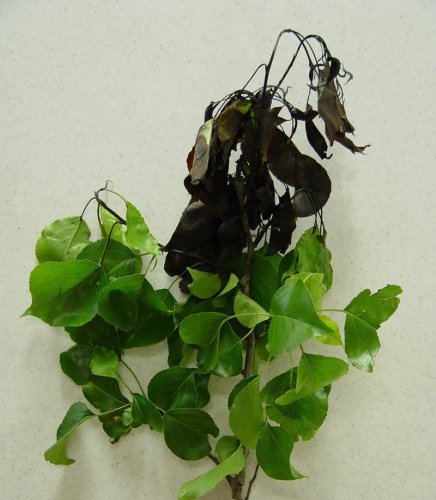 Links to this article are strongly encouraged, and this article may be republished without further permission if published as written and if credit is given to the author, Horticulture and Home Pest News, and Iowa State University Extension and Outreach. If this article is to be used in any other manner, permission from the author is required. This article was originally published on May 25, 2005. The information contained within may not be the most current and accurate depending on when it is accessed.