The Legends and Traditions of Holiday Plants

The poinsettia is native to Mexico. They were cultivated by the Aztecs. The colorful bracts were used to make reddish-purple dye. The poinsettia's milky sap was used to treat fevers.

After the Spanish conquest and the introduction of Christianity, poinsettias began to be used in Christian rituals. Franciscan priests used the poinsettia in their nativity processions.

Poinsettias were first introduced into the United States by Joel Roberts Poinsett, the United States Minister (ambassador) to Mexico from 1825 to 1829. Poinsett had plants sent to his home in South Carolina. He then distributed plants to horticultural friends and botanical gardens. The Ecke family of California has been instrumental in the development of today's poinsettia.

Initially, poinsettias lasted only a few days in the home. All had red bracts. Today's varieties are more compact, durable, and long-lasting. Red, pink, white, gold, marbled, and variegated varieties are now available.

The colorful part of the poinsettia commonly referred to as the plant's flowers are actually modified leaves or bracts. The true flowers are yellow to green, button-like objects located in the center of the bracts.

Poinsettias are short-day plants. Short-day plants grow vegetatively during the long days of summer and produce flowers when days become shorter in the fall. In order for poinsettias to flower for Christmas, they must receive complete darkness from 5 p.m. to 8 a.m. each day from early October until the bracts show good color, usually around early December. (Most poinsettia varieties require 8 to 10 weeks of short days to flower.)

Contrary to popular belief, the poinsettia is not poisonous. However, it is not intended for human or animal consumption. Individuals are still advised to keep the poinsettia out of the reach of small children and pets.

One potential health problem associated with poinsettia is dermatitis or irritation to the skin. When a poinsettia stem is cut or broken, milky sap oozes from the wound. Some individuals may develop a skin irritation if the milky sap comes in contact with their skin.

The Christmas tree is a tradition that is believed to have begun in Germany in the sixteenth century. There are several legends concerning the origin of the Christmas tree. Historians do know that the primitive cultures of northern Europe believed that evergreen trees possessed godlike powers. The evergreen tree also symbolized immortality. The Germanic peoples would bring evergreen boughs into their homes during winter to insure the protection of the home and the return of life to the snow-covered forest. As Christianity spread throughout Europe, eventually the evergreen tree was transformed into a Christian symbol.

German immigrants and Hessian soldiers hired by the British to fight the colonists during the American Revolution are thought to have brought the Christmas tree tradition to the United States.

Holiday cacti are native to the mountainous forests of southeastern Brazil. These unique members of the cactus family are epiphytes. They grow in the crotches of trees and derive water and nutrition from rain, decaying organic matter, and filtered sunlight.

The stems of holiday cacti are composed of flattened stem segments called phylloclades. The leaf-like phylloclades carry on photosynthesis for the plant.

Day length and temperature control the flowering of both Schlumbergera species. Like the poinsettia, holiday cacti are short-day plants. Plants will not bloom properly if exposed to artificial light at night. Flowers may also fail to develop if the plant is exposed to temperatures above 70°F. Night temperatures of 60° to 65°F with slightly warmer daytime temperatures are ideal for flower formation.

Learn more about the selection and care of holiday cacti in this article: All About Holiday Cacti

Mistletoe is a semi-parasitic plant with small, leathery leaves and small, white berries. Mistletoe plants manufacture their own food, but must obtain water and minerals from the host plant.

American mistletoe (Phoradendron leucarpum) can be found growing in deciduous trees from New Jersey and southern Indiana southward to Florida and Texas. It is the state flower of Oklahoma. Mistletoe sold during the holiday season is gathered in the wild. Most mistletoe is harvested in Oklahoma and Texas.

Traditions involving mistletoe date back to ancient times. Druids believed that mistletoe could bestow health and good luck. Welsh farmers associated mistletoe with fertility. A good mistletoe crop foretold a good crop the following season. Mistletoe was also thought to influence human fertility and was prescribed to individuals who had problems bearing children. Mistletoe has also been used in medicine. It has been used as a treatment for pleurisy, gout, epilepsy, rabies, and poisoning. Mistletoe also played a role in a superstition concerning marriage. It was believed that kissing under the mistletoe increased the possibility of marriage in the upcoming year.

Although mistletoe has been used in the treatment of several ailments, the berries are poisonous. Individuals using mistletoe during the holiday season should keep the sprigs out of the reach of children. For safety reasons, many companies have replaced the berries with artificial, plastic berries.

Learn more about the holiday traditions around mistletoe in this article: Mistletoe and Holly During the Holidays

Holly was considered sacred by the ancient Romans. Holly was used to honor Saturn, god of agriculture, during their Saturnalia festival held during the winter solstice. The Romans gave one another holly wreaths, carried them in processions, and decked images of Saturn with them. During the early years of the Christian religion in Rome, many Christians continued to deck their homes with holly to avoid detection and persecution by Roman authorities. Gradually, holly became a symbol of Christmas as Christianity became the dominant religion of the empire.

Learn more about the holiday traditions around holly in this article: Mistletoe and Holly During the Holidays 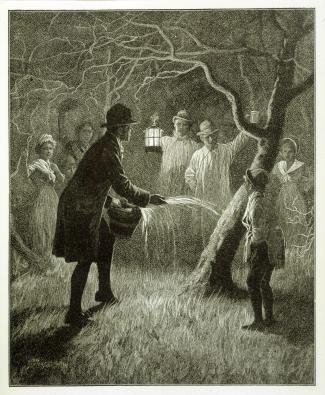 Wassailing is the tradition of going from house to house caroling, eating, drinking, and socializing with friends and relatives. Wassailing, however, was originally an important part of a horticultural ritual. In England, it focused on apple orchards. The purpose was to salute the trees in the dead of winter to insure a good crop for the coming year. The date varied across the 12 days of Christmas. If done formally, the wassail procession visited the principal orchards of the area, caroling as it went. In each orchard, major trees were selected and cider or liquor was sprinkled over their root systems. Incantations were recited.  One example of these incantations includes:

Another example is as follows:

To frighten evil spirits away, guns were fired into the air. Before proceeding, the procession usually danced about the honored trees and then snaked its way out of the orchard. The care with which the ceremony had been executed was measured by the crop yield the following year.