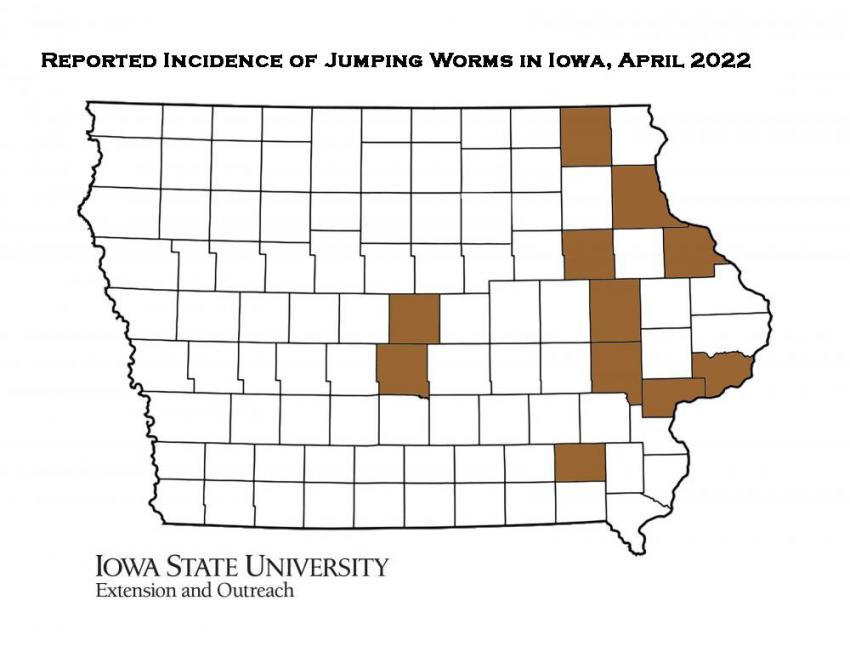 The invasive species of earthworm called the jumping worm reported from the eastern U.S. and neighboring states has been confirmed in Iowa.  So far, we have received reports from ten Iowa counties. We assume jumping worms are much more widely spread than reports indicate.

Jumping worms are among the approximately 6,000 species of terrestrial earthworms in the world. Jumping worms (Amynthas spp.) are also known as crazy worms or snake worms, names that describe their wild movement. They violently writhe and squirm when disturbed and move more like a snake than an earthworm. Watch the activity in this YouTube video.

Jumping worms originated from East Asia and are believed to have arrived in North America with potted plants, nursery stock or soil. They have been in the southeastern U.S. for many years, including in the Great Smoky Mountains. They were confirmed in the neighboring states of Wisconsin in 2013 and Illinois in 2015.

Jumping worm is most identifiable by its vigorous wriggling and thrashing behavior when picked up or disturbed.  They are 3 to 5 inches long (some up to 7 inches in length) and dark brown to gray in color rather than reddish-brown.  They are darker and smoother than our usual earthworms such as nightcrawlers (Lumbricus terrestris) and garden worms. Jumping worms have a milky-white and smooth narrow band (clitellum) that surrounds the entire circumference of the body. Other earthworm species have a raised clitellum.

Jumping worms are surface-dwellers; they live in leaf litter and organic matter at the soil surface.  They do not burrow into the soil the way nightcrawlers and garden worms do.  Jumping worms consume surface organic matter, and once established, populations can build quickly. They can out-compete and push out the other earthworms and degrade ecosystems, especially forests and woodlands by stripping the soil surface of protective organic matter.  Soils where jumping worms are present will be grainy and have the texture and appearance of coffee grounds.  For more on the harmful ecological effects of jumping worms, see the Minnesota Department of Natural Resources website.

It appears that jumping worms do not survive as worms through the winter in the Midwest. Instead, jumping worms reproduce in the fall by producing “cocoons” which survive the winter. The cocoons hatch in the spring to start the cycle over. Jumping worms reach maturity within 60 days of hatching. Jumping worms are parthenogenic; each worm can reproduce on its own without mating. They reproduce more quickly than our common earthworms and the population builds rapidly through two generations. Populations are largest in early fall and adult worms become apparent in late June and early July.

There is no cure or eradication for earthworms (European or Asian). Therefore, the goal is to prevent their spread and monitor for their presence.  Jumping worms can be spread with compost, mulch, soil, and plants. To prevent their spread do not move compost, mulch and top soil from potentially infested points of origin. Do not move plants from the infested counties and carefully inspect nursery plants prior to planting. See the Wisconsin DNR website to learn more about preventing the spread of jumping worms.

If you believe you might have jumping worms, please contact the Iowa State University Plant and Insect Diagnostic Clinic (PIDC). To confirm new county records, please send videos and images of possible infestations to insects@iastate.edu.