Insects are everywhere.  And in 1999 they were even on our stamps.  In October, 1999 the U.S. Postal Service released a page of 20 commemorative stamps titled “Insects and Spiders” that includes 4 spiders and 16 insects in intricate, lifelike detail.  These spectacular stamps will make it easy to combine two of the all-time favorite hobbies – stamp collecting and insect collecting.  Collect both at the same time!

Insects have been on stamps for a very long time and in great abundance.  Just not in the United States.  While the rest of the world was producing colorful and collectable stamps of butterflies, bugs and beetles, the US government was printing stamps of former presidents and other important people, national shrines, special events and flags.  Recent commemorative stamps in the US have diversified into the natural world and have included flowers, dinosaurs, deserts, Arctic animals, berries and now, insects.

There are lots of choices for insect stamp collectors.  On a worldwide basis, over 4,500 insect stamps have been issued, depicting over 1817 different kinds of insects. The earliest postage stamp to feature an insect was issued in Nicaragua in 1891 and depicted a honey bee hive.  Numerous insect stamps from all around the globe followed but not until after World War II did the number of insect stamps begin to increase dramatically.

Early stamps honored beneficial or beautiful insects such as honey bees, silkworms and dragonflies.  Later stamps included pest species such as mosquitoes, aphids, hornets and termites.  Insect stamps have included everything from the attractive to the destructive and from the interesting to the odd and ugly.  Though at least 14 different major groups of insects (called Orders) are represented, the butterflies and moths are the champions.  They appear on nearly two-thirds of all insect stamps.

The first US insect stamps were a panel of 4 butterflies issued on June 6, 1977 (13 cents).  None of the attractive species are from Iowa.  The Oregon Swallowtail is the state insect of Oregon, the Baltimore Checkerspot is from the eastern US, the Falcate Orangetip occurs from New England to south Texas, and the California Dogface is only found in California.

Ten years later in 1987 four more insect stamps (22 cents) were released.  This time the stamps featured familiar friends: the monarch butterfly, the luna moth, the tiger swallowtail butterfly and a lady beetle. The Schaus’ swallowtail butterfly pictured on a 32-cent stamp in 1996 is an endangered species limited in the US to hardwood hammocks of the Florida Keys.

The 1997 World of Dinosaurs commemorative stamps (32 cents) were on a page that contained two dioramas depicting the Jurassic Period.  Included in the scenes are a prehistoric dragonfly, a mayfly and an undetermined bug alongside menacing lizards.

Most recently, on August 3, 2017, the U.S. Postal Service issued Protect Pollinator stamps to “pay tribute to the beauty and importance of pollinators.” “Two of our continent's most iconic” insects are featured: the monarch butterfly and the western honey bee.  The insects are pictured pollinating five plants native to North America:  coneflower, golden ragwort, zinnia, New England aster, and goldenrod.  The Protect Pollinators stamps are Forever® stamps for $0.49 each.

The new first class insect and spider stamps are first class artwork.  The creatures look like they could crawl or hop off the page because of the realistic depth, texture, and detail.  Computer-rendered highlights and shadows give a 3-D feel to the beautifully drawn subjects.  On the back of each stamp is a brief account of the insect or spider depicted on the front.

The species depicted represent a wide portion of the country. There are 20 stamps but only 19 species (the monarch is pictured as both an adult and a caterpillar).  At least 11 could be found within Iowa.  Others have very similar relatives that live here.

The monarch butterfly is by far the most familiar insect pictured.  Others that Iowans should recognize are the periodical cicada, the black-and-yellow garden spider, and the jumping spider.  Most people have probably heard if not seen the katydid.

The “Insects and Spiders” stamps are a delight both artistically and entomologically.  Do admire insects on stamps.  Do not stamp on insects. 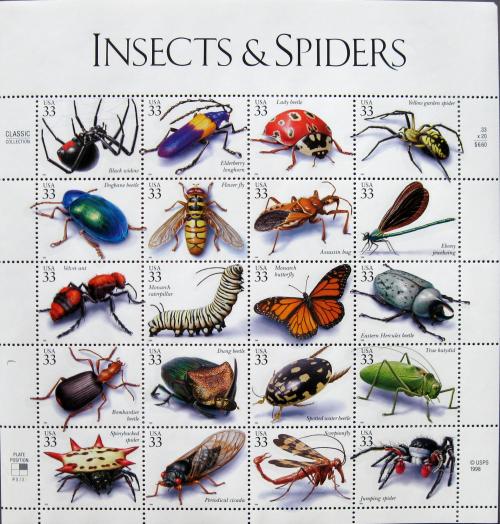