The horsehair worms are interesting threadlike roundworms that resemble the "hair of a horse's tail or mane." These long, 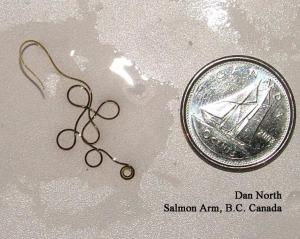 active worms may be observed in streams and ponds during late summer or fall but are more commonly noticed in domestic water containers such as bird baths, swimming pools, water troughs, pet dishes, sinks, bathtubs, and toilets. They may also be found on damp garden soil or vegetable plants after rain.

Horsehair worms are very long (4 to 14 inches) and very narrow in diameter (1/25 to 1/16 inch wide). Amazingly, the entire horsehair worm grew and developed as a parasite inside the body cavity of crickets and other large insects such as grasshoppers, katydids, beetles, and cockroaches. This internal parasite of insects does not harm humans, animals, or plants.

Parasitized crickets are thirsty and go to water to drink. At the water, the horsehair worm emerges from the insect's body and swims away, an essential step in the life cycle of this internal parasite. Insects infected with horsehair worms die as a result of the parasite. Horsehair worms are white when they first emerge from the host's body but turn yellowish-tan to brownish-black after a short time. The worms often squirm and twist in the water, knotting themselves into a loose, ball-like shape, resembling the "Gordian Knot." Another name for the horsehair worm is the Gordian worm. 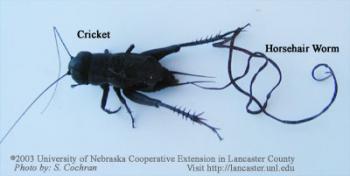 Adult horsehair worms hibernate through the winter and lay millions of eggs in the water after mating in the spring. Larvae that hatch from the eggs swim in the water until they are ingested when insects come to the water to drink, or the newly hatched larvae form cysts on plants near the water. Cysts eaten by a grasshopper or cricket dissolve inside the insect gut, allowing the juvenile worm to bore through the gut wall and into the host's body cavity. The worm absorbs nutrients directly through the body wall and lives for 2 or 3 months before emerging to start the cycle over.

Horsehair worms resemble hairs from horses actively moving in the water. A superstition once surrounding this species claimed that the worms in water troughs and puddles had miraculously come to life from the long, thin hairs of a horse's mane or tail that had fallen into the water.

Horsehair worms are completely harmless. They do not infest people, livestock, pets, or plants. They are beneficial because of the small percentage of crickets that they kill. No control measures are needed when this interesting worm is found.

The Iowa State University Plant & Insect Diagnostic Clinic will identify your insect, provide information on what it eats, life cycle, and, if it is a pest the best ways to manage them. Please see our website for current forms, fees, and instructions on preserving and mailing insects.

Contact information for each state's diagnostic laboratory for U.S. residents. If you live outside of Iowa please do not submit a sample without contacting the Plant & Insect Diagnostic Clinic.