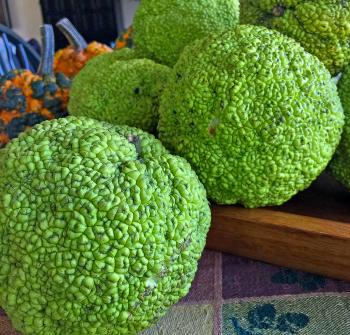 "Hedge apple" trees (also called Osage orange, Maclura pomifera) are not related to apples or oranges, and their fruit is inedible.  The large, grapefruit-sized, brain-like green fruit are better known than the trees and show up in the fall of the year in stores and farmers' markets where they are sold for their purported ability to repel insects.

The hedge apple tree has a long and storied history and is native to Texas, Oklahoma, and Arkansas region.  The wood of these trees was prized by Native Americans.  Hedge apple trees were used by early settlers as a living fence and were spread across the prairie and planted in hedges in the mid-1800s.  This greatly expanded the distribution of hedge apple and is the reason they are still commonly found in wooded field borders.

The use of hedge apples for insect control is one of the most enduring pest management home remedies. Claims abound that hedge apples around the foundation or inside the basement will repel boxelder bugs, crickets, spiders, and other pests.  Research conducted at Iowa State University has demonstrated that chemicals extracted from the fruit can be repellant to tested insects (German cockroaches, mosquitoes, and houseflies).  In addition, sliced hedge apples placed in enclosed, small spaces did repel insects.  However, there is still no evidence that putting whole fruit around the house or in the basement will have any effect on insect pests.  In large or open spaces there is so much air movement that whatever small amount of repellant chemical may be present will quickly dissipate.  In addition, the chemicals may not be repellant to all insects or to non-insects like spiders, millipedes, and centipedes.

We don't recommend the use of hedge apples for pest control.  If you choose to try it, be aware that the milky juice present in the stems and fruit of the Osage-orange may cause irritation to the skin.  Equal measures of skepticism and caution are advised!

To learn more about the Osage orange tree, see "What are hedge apples?"