Growing Lilacs in the Home Garden

Lilacs are one of the most cherished and adored of all flowering shrubs. They are noted for their beautiful blossoms and fragrance. Lilacs are available in a wide range of colors. Though they offer mainly one season of interest, their spring flower displays are greatly appreciated after a long, hard winter. 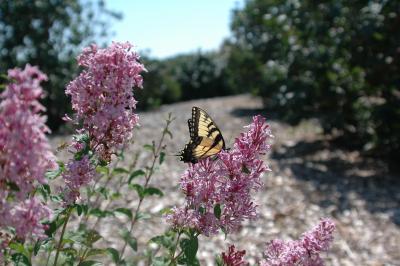 If you have lilacs or if you are interested in planting one, there are several factors to consider.

Lilacs are adapted to USDA Hardiness Map zones 3, 4, 5 and milder areas of zone 2. They thrive in sunny sites with good air circulation. Lilacs on their own roots are far more hardy than grafted lilacs. Lilacs need at least 4 to 6 hours of sunlight a day for best flower production. These suckering shrubs tolerate a wide-range of soil conditions, but grow best in moist, well-drained soils.  Excessively wet conditions are not well tolerated.  Depending on species, blooms begins in late April and early May and continues through mid-June. Shrubs should be spaced between 10 and 15 feet apart for specimen displays and 5 to 8 feet apart for a hedge effect.

The spent flowers on lilacs aren’t very attractive. Removing the spent flowers (deadheading) improves the appearance of the shrubs and prevents seed pods (capsules) from forming. Deadheading allows the lilacs to use much of their energy for next year’s flower bud development rather than seed pod formation. As a result, lilacs that are promptly deadheaded after flowering often bloom more heavily the following season than those that are not deadheaded. When deadheading lilacs, make the pruning cut at the base of the flower cluster and just above the uppermost leaves. While deadheading is beneficial, the removal of spent flowers may not be feasible for home gardeners with large numbers of lilacs.  Shrubs will still bloom in subsequent years even when not deadheaded.

Lilacs set their flower buds for the following season in mid-summer, not long after the spring blooms fade.  Pruning shrubs immediately after flowering is the best time to prune lilacs and will help the lilac produce the most flowers the following spring.

Lilacs respond best to the removal of select branches at their point of origin or entire branches from the base of the suckering shrub rather than with shearing or clipping.  This strategic removal of branches preserves the shrubs natural shape.  Removing the oldest and largest branches within 6 to 8 inches of the base every 3 to 5 years can also reduce the overall size of the shrub and promote new growth that blooms better than older stems.  Large old branches can be removed immediately after flowering or in late winter (March or early April). When pruned in late winter, some blooms will be sacrificed, but larger branches are often not as floriferous and it is much easier to see and remove the branches when the plant is dormant and without leaves.

Lilacs offer gardeners a large variety of plant shapes, sizes, and flower colors. Hybridizers have worked extensively with the common lilac resulting in over 1000 different varieties.  There are seven color classifications for lilacs: white, pink, violet, blue, magenta (reddish-purple), lilac, and purple. Flowers are also available in single and double forms.  Below are several species of lilac that grow in Iowa.  They are roughly listed by bloom time from earliest to latest.

For early blooms, try Syringa × hyacinthflora, commonly called the early flowering lilac.  These hybrids between S. oblata and S. vulgaris are well-suited for cold climates and bloom in mid to late April.  Plants grow 8 to 10 feet tall and wide and can develop a reddish purple leaf color in the fall.

The Common Lilacs or French Hybrid Lilacs, Syringa vulgaris, are most noted for their bloom size and fragrance. There are thousands of cultivars available, some dating back to the late 1800's. These became known as French Hybrids due to the work of Victor Lemoine, a French hybridizer, who bred about 200 different lilacs in the 1870's.The common lilac grows 10 to 15 feet in height with a spread of 6 to 12 feet. The flowers are extremely fragrant and appear in early to mid-May on panicles originating in pairs from the terminal buds. Numerous varieties are available with white, violet, blue, lilac, pink, and magenta flowers. Varieties are available with single and double flowers.

Syringa meyeri, Meyer Lilac, grows 4 to 8 feet tall, and 6 to 12 feet wide forming a dense, broad-mounded shrub. These lilacs produce smaller flower clusters than most lilacs (4 inches long and 2 1/2 inches wide), but make up for their lack of size with shear number of blooms. The lilac to violet blossoms have a spicy fragrance. These are great foundation plants because of their compact size (6 feet at maturity) and freedom from disease. They emerge before plants are fully leafed out, usually early to mid-May. This species is not affected by powdery mildew as are many other species.

Syringa patula, the Manchurian lilac, has an upright form and grows 9 feet tall. The flower panicles often occur in pairs from the terminal buds of last years growth. They are 4 to 6 inches long with lilac purple flowers and appear in late May to June. The commonly available variety, 'Miss Kim', grows 5 to 6 feet tall (sometimes taller) and 4 to 5 feet wide.

The Chinese lilac, Syringa × chinensis, is a hybrid between S. × persica and S. vulgaris. This shrub is round-topped with arching branches. It flowers more profusely than the common lilac and grows 8 to 15 feet tall with a similar spread. Flowers are purple lilac in color and appear in mid-May.

The cutleaf lilac, Syringa × laciniata, has a low, dense, mounded form. Plants grow 6 to 8 feet tall and wide. The flowers are pale lilac in color and appear all along the stems. They occur in May. The foliage is lacy and fine-textured.

Syringa × persica, the Persian lilac, is a graceful shrub with upright, arching branches. Plants grow 4 to 8 feet tall and spread 5 to 10 feet. The foliage is bluish green. Flowers are pale lilac in color and fragrant. They appear in mid-May. A nice plant, but often severely affected by powdery mildew.

Syringa microphylla is commonly known as the littleleaf lilac. The foliage is about 1/4 the size of the common lilac, medium green in color above, grayish green and pubescent beneath. The plant grows 6 feet tall and 9 to 12 feet wide. Flowers are rosy lilac in color. The panicles are just 1 1/2 to 2 1/2 inches long and appear in late May to early June. The variety 'Superba' has single deep pink flowers.

For later blossoms, try one of the Preston Lilacs, Syringa × prestoniae, a cross between S. villosa and S. komarowii subsp. reflexa have resulted in the well known Preston lilacs. Preston lilacs have elongated leaves that are more resistant to powdery mildew. Their flowers have a spicier fragrance that is milder than many of the French hybrids.  Plants are reliably cold hardy to USDA Hardiness Zone 3.

Syringa villosa, the late lilac, grows 6 to 10 feet tall and 4 to 10 feet wide providing a dense plant for the shrub border. The rosy lilac to white flowers appear in mid to late May sometimes continuing into June. The flower panicles are 3 to 7 inches long.

Nodding lilac, Syringa komarowii subsp. reflexa, grows 10 to 12 feet tall and wide. The purplish pink flowers are produced on 4 to 10 inch long panicles. This species is not fragrant and is hardy for growing zones 5 to 7.

Syringa reticulata, the Japanese tree lilac, grows 20 to 30 feet tall with a spread of 15 to 25 feet forming an oval to rounded-shaped small tree. The large, fragrant white flower panicles appear in early to mid-June. The fragrance of the flowers is privet-like.   It is one of the hardiest trees on the list, as trees are hardy to zone 3.  Trees are also noted for their smooth, dark cinnamon colored bark.

'Ivory Silk' is an excellent cultivar that flowers well when young and has a more compact growth habit. Additional varieties include 'Chantilly Lace', 'Regent', and 'Summer Snow'. A related species, Syringa pekinensis, the Pekin lilac, is a smaller tree, growing just 15 to 20 feet tall. It is often multi-stemmed and finer in texture than the Japanese tree lilac. The flowers are creamy white on 3 to 6 inch long panicles in late May to June.

Cultivars of the common or French hybrid lilac (Syringa vulgaris) often do not bloom for several (five or more) years after planting. The shrubs must grow and mature before they are capable of flowering. Plants should receive at least six hours of direct sun each day.

Lilacs planted in partial shade will not bloom well.

It is generally not necessary to fertilize lilacs. However, lilacs can be lightly fertilized in early spring. Heavy fertilization may promote excessive vegetative growth and discourage flowering.

Pruning can also affect flowering. Lilacs bloom on the previous year’s growth. The best time to prune lilacs is immediately after flowering in spring. Pruning lilacs in late summer, fall, or winter may remove many of their flower buds.

Blooms in Fall (instead of spring)

Occasionally lilac will bloom out of season during the fall months.  This out-of-season bloom is usually triggered by stressful environmental conditions during the summer growing season such as heat, drought, severe defoliation from disease or pest, and/or heavy pruning.

These spring blooming plants set their flower buds for the following year in early summer shortly after the previous spring blooms fade.  Stressful conditions put the plant in a dormant-like state and when the cooler temperatures of fall arrive, some of the those flower buds are triggered to bloom.

This untimely bloom will not harm the plant, although there will be fewer flowers on the plant the following spring. Once fall blooms are observed, there is nothing that can be done to fix the issue.  In future years, good care when there are stressful growing conditions will help reduce the chance of the out-of-season bloom.

Some spring blooming species have varieties or cultivars that have been selected because they will bloom in fall - although that late season bloom is not typically as floriferous as the spring bloom.  Bloomerang® lilac (Syringa 'Penda') is one example.  These plants are intended to bloom in the fall and are often marketed and sold as special cultivars that regularly have blooms in both spring and fall.  Fall blooms on these varieties are normal.

Powdery mildew is favored by high humidity, cool nights and warm days. Plants growing in partial to heavy shade are most susceptible to powdery mildew.

Powdery mildew does not cause serious harm to lilacs. The damage is mainly aesthetic. Spraying with a fungicide is not warranted. When planting lilacs, select a site that receives at least six hours of direct sun each day. Powdery mildew will not be a serious problem in sunny areas. Judicious pruning of nearby trees (to increase the amount of sunlight) should help reduce the severity of powdery mildew on lilacs growing in shady locations. Another option would be to transplant the lilacs to a sunny site.

Overall lilacs are easy to grow and relatively pest and disease free. Powdery mildew is a common issue with some species of lilac, in particular the popular common lilac (Syringa vulgaris). When evidence of disease or insect damage are observed, there are a few issues that can cause these problems.

Over time lilacs can get large, leggy and unattractive.  Often this is paired with poor bloom.  Pruning these large, overgrown shrubs has special considerations outlined in this article.