Trees provide many environmental and psychological benefits. However, trees and turfgrass are not very compatible.
Large trees cast considerable shade. Trees also compete with turfgrass for water and nutrients. As a result, most turfgrasses have a difficult time growing in the vicinity of large shade trees. 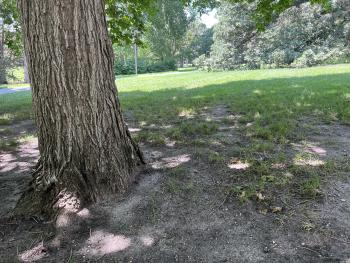 In nearly all cases, removing the tree is not a desirable option!  If the grass growing in shady spaces is not looking good, you have a few options to improve the appearance of these areas in your landscape.

Each of these options has its advantages and challenges.  Consider each to determine which will work best for your landscape.

Attempting to grow grass under large shade trees or shady areas created by buildings, fences, and walls is difficult and frustrating.  Because of unfavorable growing conditions, grass doesn’t grow well in shady areas and the area is often little more than bare soil and a few weeds.  A shade-tolerant groundcover is an excellent alternative to turfgrass in shady areas. Once they are established, groundcovers require less maintenance than turf, they can out-compete most weeds, and some have attractive flowers. Groundcovers will require more time to establish initially but are worth the effort in the long run.

When considering a groundcover to replace the turfgrass often it is best to select not only a species that will grow well in partial to heavy shade, but also spreads readily to cover the area and will perform well with the dry conditions that often occur under trees.  Remember, the area can be a mix or matrix of several different species to provide interest all season. A partial list of groundcovers that are good turfgrass alternatives is provided below. More information about groundcovers can be found in this article: Groundcovers for Shade

When areas under trees are so shady and dry that few plants grow, a good alternative is to lay down a layer of mulch.  Mulch helps suppress weeds, conserves soil moisture, and provides an attractive alternative to bare soil or sparse plants.  Mulch has the added benefit of creating a great growing environment for the tree by eliminating any plants that would compete with the tree for water and nutrients.

Shredded or chipped wood or bark mulch, as well as pine needles, are great options as they are attractive, weed-free, and decompose slowly.  Spread the mulch 2 to 4 inches thick and refresh thin or bare spots every few years.

Care & Maintenance of Turfgrass in the Shade

One key to successfully growing grass in shady areas is to select the proper turfgrass species for the site. Kentucky bluegrass is the most widely grown turfgrass in Iowa. However, Kentucky bluegrass does not perform well in shady areas. The fine-leaf fescues (creeping red fescue, hard fescue, chewings fescue, etc.) are the most shade tolerant of the cool-season turfgrasses grown in Iowa. When attempting to establish grass in a shady area, select a grass seed mix that contains a high percentage (at least 50%, preferably 75%+) of the fine-leaf fescues. Late summer (mid-August to early September) and April are the best times to establish grass in shady areas.

When mowing turf, never remove more than 1/3 of the total leaf surface at any one time. If the mower is set at 3 inches, cut the grass when it reaches a height of 4 1/2 inches.

The fine-leaf fescues possess good drought tolerance and only need to be watered during prolonged dry periods. When watering, irrigate deeply but infrequently. A single application of 1 inch of water per week is usually best. Early morning is the best time to water turfgrass. Watering in the late afternoon or evening may increase the potential for disease problems.

Shady lawn areas often become thin over time because of the difficult growing conditions. Periodically, it becomes necessary to overseed sparse turf areas. The best times to overseed shady areas are late summer (mid-August to early September) and April. Small areas can be overseeded, by carefully raking the site, sowing the grass seed, and then raking the area a second time. A core aerifier may be necessary when overseeding large areas. After the seed has been sown, keep the seedbed moist with frequent, light applications of water to encourage germination.

Growing conditions for turfgrass can be improved by removing low-hanging tree branches. Pruning off the lower limbs will increase the amount the light the grass receives. It will also increase air circulation, reducing the potential for disease problems.

Turfgrass plants utilize light, water, and nutrients to manufacture food. In fall, lawn areas beneath large trees are often completely covered with leaves. The leaf debris prevents the turfgrass plants from manufacturing and storing food prior to winter. To promote turfgrass vigor, rake off the leaves or cut them into small pieces with a mower. After mowing, it's imperative that the shredded leaves do not completely cover the turfgrass.

Updated from an article that originally appeared in the May 2, 2007 issue of Horticulture and Home Pest News, pp. 41-42.