Few vegetables have the ability to grow to the enormous sizes of pumpkins and squashes. The size of world champion pumpkins is staggering. Giant pumpkins have been recorded with a circumference of greater than 10 feet or weighing over one thousand pounds. While attaining a half-ton jack-o-lantern may not be your goal, growing giant pumpkins is certainly fun for many gardeners. With proper cultivar selection and diligent care, growing giant pumpkins can be rewarding. You might even want to get that "Big Pumpkin" form filled out for the county or state fair! 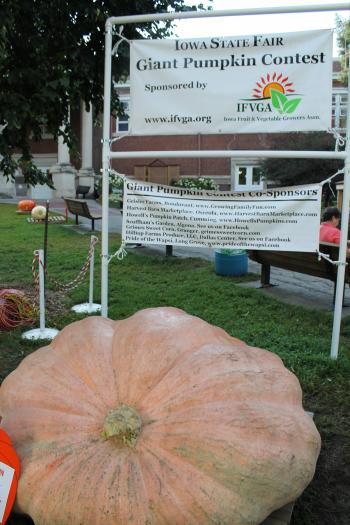 Start With the Right Cultivar

Selecting the right cultivar for planting is of the utmost importance. The cultivar name is often a dead giveaway to its ultimate size. Select cultivars such as 'Dill's Atlantic Giant', 'Prizewinner', 'Big Max', or 'Big Moon'. Some of these varieties are not actually pumpkins at all but pumpkin-like squash. These giant pumpkin cultivars are also not normally suitable for cooking.

As with any planting, selecting and preparing the planting site is critical. Make sure the site is in full sun with well-drained soil. Prepare the soil by adding a generous amount of well-rotted manure mixed with the garden soil.  Select a site that is easy to access with a water source nearby.  You will need to check in on your giant pumpkin regularly and provide supplemental irrigation to get the biggest fruit.

Pumpkins require a long growing season and warm soils. Seeds can be started indoors two to three weeks before the last expected frost or directly seeded into the garden after the danger of frost has passed. Two or three seeds are planted in each hill or pot. Later when the first true leaves appear, thin to one plant per pot or hill. If you start the seeds indoors, be sure to harden the seedlings to outdoor conditions for a week before planting. Initially, place the seedlings in a shady, protected location and gradually expose them to longer periods of sunlight. The seedlings may need occasional protection from winds and cool nights at the beginning of the season.

For giant pumpkins be sure to provide ample space for growth. Twenty to twenty-five feet between plants is not uncommon for world-champion pumpkins. 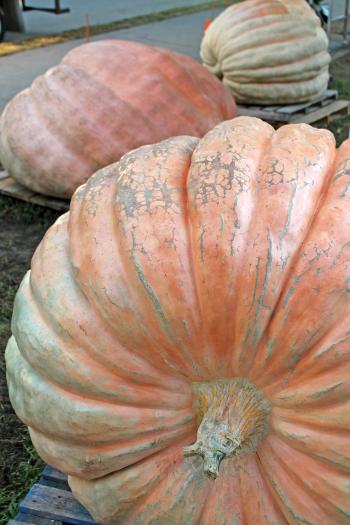 As the pumpkins grow, a consistent supply of water and fertilizer is essential. Pumpkin plants require one inch of water per week. Watering in the morning is best since it allows the foliage to dry during the day and thus prevents the possibility of disease. A weekly addition of a complete fertilizer is also needed. Avoid high-nitrogen fertilizers as they may inhibit flower initiation or fruit growth. There are as many fertilizer regimes as there are pumpkin varieties. Some individuals use high phosphorus fertilizers before and after flowering while others use organic-type fertilizers like bone meal and fish emulsion continuously. Use a regime most convenient for you and your garden.

When the baby pumpkins appear, select two or three fruits on separate runners on each plant. Remove all other fruit that forms. This ensures that all the vine's energy will go to the fruit left on the vine. The fruit will rapidly gain weight and size. It can be fun to take weekly measurements and record the progress. The trick is to keep the pumpkins growing for as long as possible.

Updated from an article that originally appeared in the May 21, 1999 issue of Horticulture and Home Pest News, pp. 62-63.