Why doesn’t my hydrangea bloom?

Why doesn’t my hydrangea bloom?

Smooth, oakleaf, bigleaf and climbing hydrangea all flower well in partial shade, but when in too much shade may not bloom well. Panicle hydrangea requires at least partial shade to set flowers and often blooms best in full sun. Most hydrangeas need to be established before flowering and may not produce blooms for the first two to three years, especially climbing hydrangea. Bigleaf, climbing and oakleaf hydrangeas that are pruned heavily in the spring will likely not set flowers. Heavily pruned panicle hydrangeas usually set flowers later in the growing season than expected. 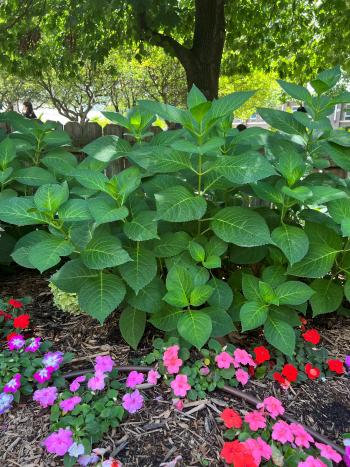 Many older varieties of bigleaf hydrangea, such as ‘Forever Pink’ and ‘Nikko Blue,’ usually do not bloom in Iowa. The bigleaf hydrangea blooms on the previous season's growth. Unfortunately, in Iowa, the plants often die back to the ground in winter. The plants grow back vigorously in spring but don't bloom since the previous season's growth has been destroyed. Newer bigleaf hydrangea cultivars, such as Endless Summer, Twist-n-Shout, ‘Blushing Bride’ and BloomStruck, bloom much more reliably in Iowa gardens as they set flowers on both old and new growth.