What are hedge apples?

What are hedge apples?

The “hedge apple” is the yellow-green, softball-sized fruit of the Osage-orange (Maclura pomifera).  The Osage-orange is a small- to medium-sized tree.  It commonly grows 25 to 30 feet tall.  The Osage-orange is dioecious.  Dioecious plants produce male and female flowers on separate plants.  Small green flowers appear on trees in May or June.  Female trees produce 4- to 5-inch-diameter fruit that mature in September or October and fall to the ground.  Osage-orange fruit are also called “hedge balls.”  The common names “hedge apple” and “hedge ball” are derived from the widespread use of Osage-orange trees as hedges by farmers in the mid-nineteenth century. 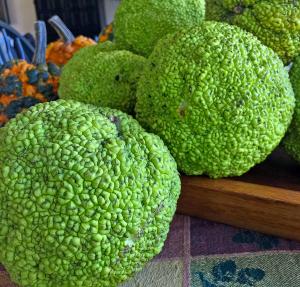 While somewhat attractive, the fruit have little value.  “Hedge apples” are not an important food source for wildlife as most birds and animals find the fruit unpalatable.  Some individuals claim the fruit control insects in the home.  Placement of “hedge apples” around the foundation or inside the basement is claimed to provide relief from cockroaches, spiders, boxelder bugs, and other pests.  While research at Iowa State University has found compounds within the Osage-orange fruit that repel cockroaches, whole fruit have not been proven to repel or control insects in the home.