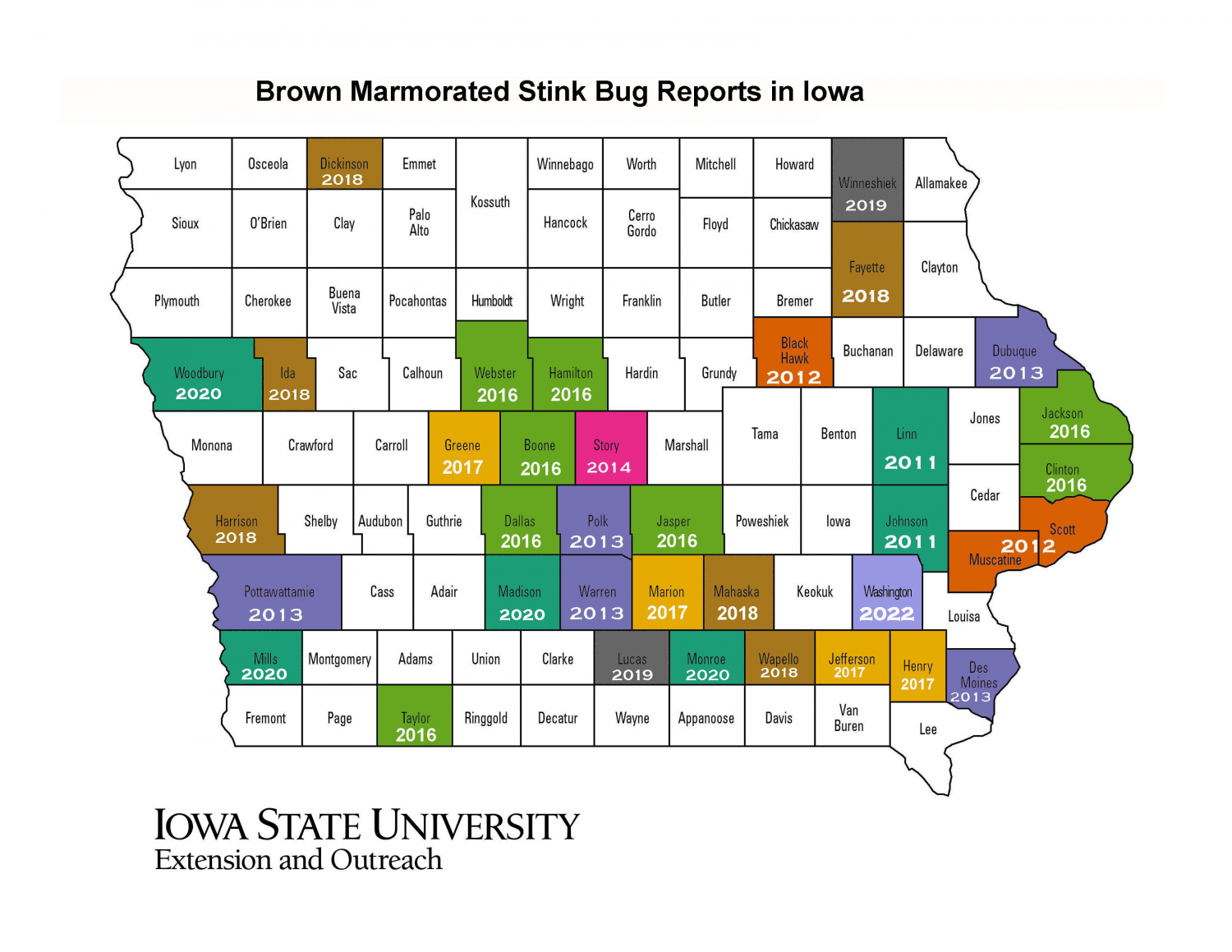 The brown marmorated stink bug (BMSB), Halyomorpha halys, is an introduced, invasive insect new to North America. It was first identified in fall 2001 in Allentown, PA; though unconfirmed reports go back as far as 1996. The accidental introduction was possibly via shipping containers from Asia. It is native to China, Japan, Korea, and Taiwan.

BMSB is a plant pest that uses its piercing-sucking mouthparts to feed on sap from a wide variety of plants, including field crops, vegetables, fruits, trees, and shrubs. In addition, like the boxelder bug and the multicolored Asian lady beetle, BMSB congregates on houses and buildings in the fall of the year and accidentally wanders inside as a nuisance pest.  Stink bugs are named for the characteristic, disagreeable, odor they produce, and the cilantro-like odor from BMSB makes the invasion even more distressing.

BMSB has been found in 47 states. The first discovery in Iowa was in Cedar Rapids in 2011. Currently, it has been reported in 35 Iowa counties. Please report additional county detections to insects@iastate.edu. BMSB has caused crop damage in the mid-Atlantic region and minor agricultural problems elsewhere. In Iowa and the remaining states where detected, it has been reported primarily as a household nuisance.

BMSB was the subject of an article in The New Yorker magazine on March 12, 2018.

BMSB is similar to other stink bugs with a roughly-triangular or "shield" shaped body. The adults are approximately 5/8 inch long and mottled brownish-grey in color. The word "marmorated" means marbled, a description of the mottled color on the back of BMSB. BMSB can be distinguished from other species of stink bugs by the alternating dark and light bands on the last two segments of the antennae, and the alternating light and dark banding on the exposed upper edges of the abdomen. The underside of the abdomen is light-colored.

Compare BMSB to other stink bugs and "look-alikes" common in Iowa at Stink Bugs and Similar-Appearing Insects.

BMSB spends the winter in the adult stage hiding in houses and other protected locations. In May the adults leave the hiding sites to feed on sap from plants. After mating, the females lay eggs in clusters of about 28 eggs on the undersides of leaves from June to August. A single female can lay up to 400 eggs. Eggs hatch into wingless immature bugs called nymphs that feed and grow for about 5 weeks before reaching the adult stage in late summer. There is one generation per year.

To date, damage to field crops, fruits, vegetables, or ornamentals has not been reported in Iowa. Damage in Iowa and nearby areas has been limited to the annoyance and nuisance of stink bugs entering homes, office buildings, etc.

BMSB enters buildings in the fall when they are seeking sheltered locations where they can successfully spend the winter in hibernation. They are not seeking warmth and they cannot predict colder temperatures nor that a house will be heated during winter. Like ladybugs, boxelder bugs, and cluster flies, every stink bug found indoors walked or crawled in through cracks and gaps during the fall of the year (usually late September to October). Typical entry points include cracks and gaps around windows and doors, between the foundation and siding, between the siding and soffit, around chimneys, and so forth.

Stink bugs do not bite, they cannot sting and they do not feed on structures or house contents, or occupants. They are a nuisance and annoyance to residents because they are large, can occur in large numbers, and fly. They cannot cause any structural or cosmetic damage to your home. Further, stink bugs (and boxelder bugs, ladybugs, and cluster flies) cannot reproduce indoors or during the winter. While inside, BMSB do not feed and they do not reproduce. In fact, females are incapable of reproducing until early spring.

The first step in household accidental invader management is to seal cracks, gaps, and potential entry points before they get in. Exclude BMSB by sealing cracks and openings with caulk or weather-stripping. Keep windows, screens, and doors in good repair so they seal tightly.

Stink bugs already indoors should be removed vacuumed or swept up and discarded. If you use a vacuum cleaner or shop vacuum the vacuum bag should be promptly removed and discarded. Indoor insecticide sprays for BMSB are not recommended. Spraying indoors, including the use of "bug bombs" does not prevent entry, and only accidental invaders out in the open at the time of treatment will be affected.

The Iowa State University Plant & Insect Diagnostic Clinic will identify your insect, provide information on what it eats, life cycle, and if it is a pest the best ways to manage them.  Please see our website for instructions on mailing insects and digital images.

Contact information for each state's diagnostic laboratory for U.S. residents.  If you live outside of Iowa please do not submit a sample without contacting the Plant & Insect Diagnostic Clinic. 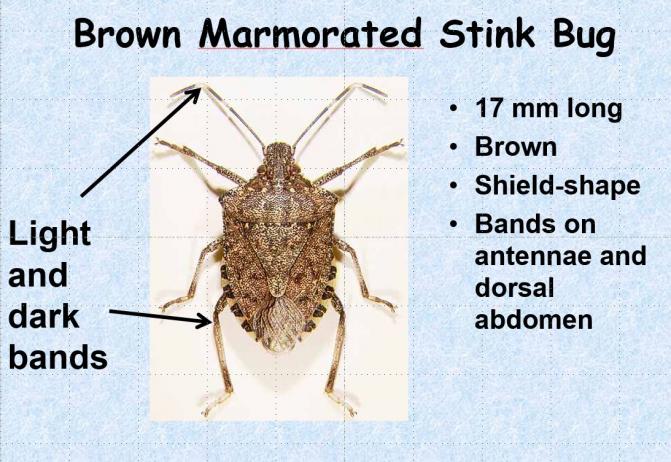