The Lowdown on the Low Down Doodlebug.  Reprinted Yard and Garden News Release from June 1999

What lives in a pit, snares innocent passersby, and sucks them dry?

No.  Not lawyers and IRS agents!  This is a garden column.  Think about wildlife you might find around the house.

Give up?  The doodlebug!

One of the true marvels of the insect world is this small, brown insect that engineers a delicately balanced trap and then waits at the bottom for fresh food to slide in.  Once in, Presto!  Instant lunch!

The doodlebug is also known as the antlion.  This is not the mythical beast described in ancient and medieval writings as a hybrid animal with the face of a lion and the hind parts of an ant.  This is the real thing and a genuine insect you might find next to your house foundation if you are lucky and a careful, patient observer.

The antlion burrows into loose, dry, bare soil and constructs a cone-shaped pit by flipping loose soil out of the hole with its head.  The pits are usually in sandy soil in an area protected from rain and wind.  Sunny, south-facing slopes are particularly good for doodlebugs.  Around the house, look for doodlebugs under eaves or overhangs.

The antlion begins a pit by walking backward and pressing its wide, flattened abdomen into the soil.  This process creates a winding or spiral-shaped trail in the sand that is allegedly the source of the name “doodlebug.”  (Doodle: to make aimless scribbles, designs, or sketches.)

When the doodlebug has backed into the loose soil, and its head is under the surface, the flipping starts.  Using the head and long, sickle-shaped mandibles, the antlion digs deeper and deeper into the light, loose soil by energetically throwing the sand to the surface.  The digging continues for only approximately 15 minutes while the larva spirals deeper into the ground. The finished pit may be 1 to 2 inches across and 1 to 2 inches deep.

The antlion finally comes to rest at the bottom of the funnel-shaped crater.  The long, slender jaws are held wide open while the antlion waits for its prey.

Mostly ants, but other insects as well, become food for the waiting antlion.  A hapless ant trudging across the sandy surface slips into the pit.  As the ant scrambles to regain its footing and crawl back out the top, the delicately balanced grains of sand along the sides of the pit slide to the bottom and carry the ant closer to the open “jaws of doom.”  The antlion resumes the frenzy of flipping sand into the air, pelting the sliding ant and facilitating the ant’s slide to the bottom.

An ant that reaches the bottom of the pit rarely escapes.  The antlion efficiently grabs the ant with the long mandibles.  Once seized, the ant is quickly pulled under the surface, paralyzed, and then sucked dry.  When done eating, the antlion throws the shriveled carcass out of the crater with one last flip of the head.

An antlion makes several pits and repeats the feeding process several times as it grows and develops over a period of time that may last a long as 3 years.  Pits of different sizes do not necessarily indicate the size of the insect.  A large pit indicates a hungry antlion, that is, one that hasn’t fed for a long time.

Few people are ever fortunate enough to see the antlion.  They are difficult to find because they spend so much time motionless at the bottom of the pit.  Also, they are tan or brown (dirt-colored) and usually camouflaged with a thin layer of dust or sand that clings to their surface.  They are easy to overlook.  The best view of the larvae is achieved by sifting them out with a tea strainer.  Just scoop up an inch or so of soil from below the bottom of the pit and shake away the soil.

When you find the antlion, it will be up to ½ inch long with a flat, slender body.  The body is wedge-shaped, with the head narrower than the abdomen.  However, the prominent feature will be the sharp, thin, sickle-shaped mandibles extending from the front of the head.

Antlion adults are rather delicate, fragile-looking insects up to 2 inches long that look like damselflies.  The adults are seldom seen because they are active at night.  They have a relatively short life span of approximately one month.

Doodlebugs are not harmful in any way.  In fact, we might call them beneficial because they feed on ants that we consider to be pests.  Doodlebugs are a curiosity and one of the fantastic marvels of Nature.  Control is definitely not necessary.  Careful observation and appreciation are highly recommended. 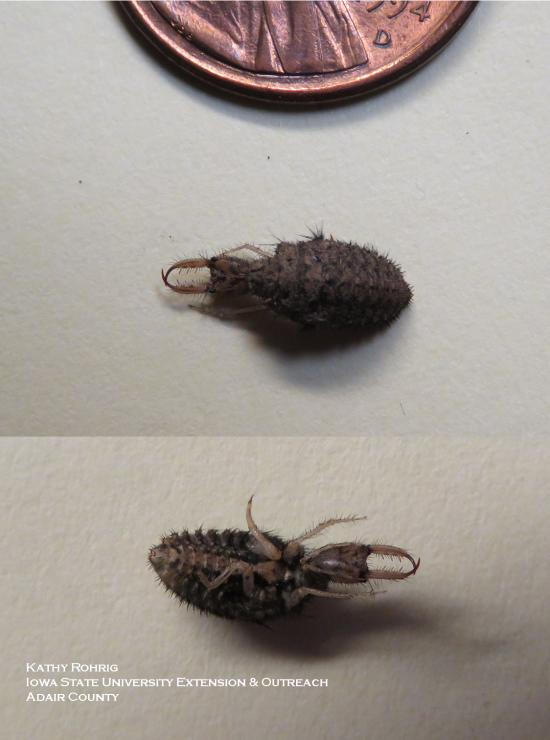