Amaryllis are popular flowering bulbs that are forced indoors for their large, spectacular blooms during the winter months. The trumpet-shaped flowers can be as large as 8 to 10 inches across and are produced atop an 18- to 30-inch-tall flower stalk. Flower colors include red, pink, orange, salmon, white, and bi-colors. Single-flowering, double-flowering, and miniature amaryllis varieties are available. 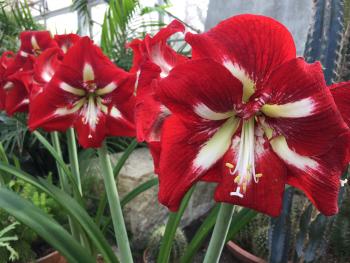 Although their flowers resemble lilies, the amaryllis belongs to the Amaryllidaceae family. Its genus is Hippeastrum. Amaryllis are native to tropical and subtropical areas of the Americas. Both the bulb and the plant are poisonous. 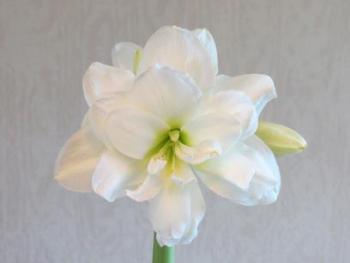 Amaryllis bulbs can be purchased pre-planted in pots or unpotted.  When purchasing amaryllis, select large, solid bulbs.  The largest bulbs usually produce 2 or 3 flower stalks. Pot amaryllis bulbs in early to mid-November for bloom during the Christmas holidays. 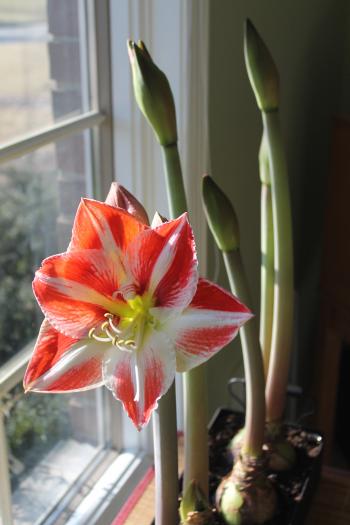 When planting an amaryllis bulb, select a pot that is approximately 1 to 2 inches wider than the diameter of the bulb.  The container may be clay, ceramic, or plastic, but should have drainage holes in the bottom.  Plant the bulb in a well-drained potting mix.  Place a small amount of the potting mix in the bottom of the pot.  Center the bulb in the middle of the pot.  Then add additional potting soil, firming it around the roots and bulb.

When finished potting, the upper one-half of the bulb should remain above the soil surface.  Also, leave about one inch between the soil surface and the pot’s rim.  Then water thoroughly and place in a warm (70° to 75°F) location.

Some amaryllis bulb kits come with a compressed disk of coir (developed from coconut husks) to use as a soilless potting media.  Rehydrate the coir by adding warm water and waiting for it to expand and loosen. Frequently this disk does not provide enough potting media to adequately pot the bulb.  In most cases, it is easier to forget the disk of coir and just use general, all-purpose, well-drained potting soil.

When the amaryllis begins to bloom, move the plant to a slightly cooler (65° to 70°F) location that doesn’t receive direct sun to prolong the life of the flowers.

Some individuals discard the amaryllis after flowering. However, it is possible to save the amaryllis and force it to flower on an annual basis. The key to successful reflowering is proper care. 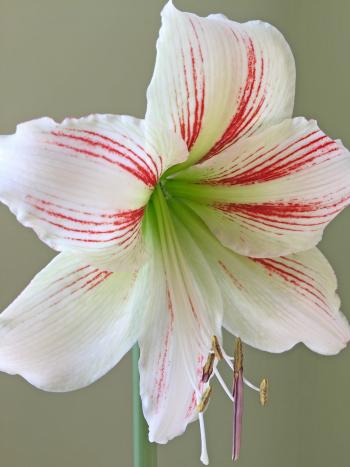 After the flowers fade, cut off the flower stalk with a sharp knife or pruners. Make the cut 1 to 2 inches above the bulb. Do not damage the foliage. In order for the bulb to bloom again next season, the plant must replenish its depleted food reserves. The strap-like leaves manufacture food for the plant.  Place the plant in a sunny window and water when the soil surface is nearly dry. Fertilize every 2 to 4 weeks with a dilute fertilizer solution.  A balanced all-purpose fertilizer at half strength works well.

The amaryllis can be moved outdoors in late May. Harden or acclimate the plant to the outdoors by initially placing it in a shady, protected area.  After 2 or 3 days, gradually expose the amaryllis to longer periods of direct sun. Once hardened, select a site in part sun. Dig a hole and set the pot into the ground. Outdoors, continue to water the plant during dry weather. Also, continue to fertilize the amaryllis once or twice a month through July.  Bring the plant indoors in mid-September. Plants left indoors should be kept in a sunny window and watered and fertilized in the same way as those grown outdoors.

Getting Amaryllis to Rebloom

In order to bloom, amaryllis bulbs must be exposed to temperatures of 50° to 55°F for a minimum of 8 to 10 weeks. This can be accomplished by inducing the plant to go dormant and then storing the dormant bulb at a temperature of 50° to 55°F.

To induce dormancy, place the plant in a cool, semi-dark location in late September and withhold water.  Cut off the foliage when the leaves turn brown.  Then place the dormant bulb in a 50° to 55°F location for at least 8 to 10 weeks. After the cool requirement has been met, start the growth cycle again by watering the bulb and placing it in a well-lighted, 70° to 75°F location.

Rather than inducing dormancy, another option is to place the plant in a well-lit, 50° to 55°F location in the fall. Maintain the amaryllis as a green plant from fall until early to mid-winter. After the cool requirement has been met, move the plant to a warmer (70° to 75°F) location.

When Amaryllis Fails to Bloom

When growth resumes, some amaryllis bulbs produce foliage, but no flowers. Amaryllis that fail to bloom may not have been able to store adequate food reserves in their bulbs in spring and summer. Fertilize plants at a higher rate or more frequently in the spring and summer months and be sure to provide adequate light.  Bulbs will produce flowers when the bulb has produced and stored enough carbohydrates.

Occasionally, bulbs fail to flower because they have not been exposed to the proper temperatures.  Provide temperatures of 50° to 55°F for 8 to 10 weeks to initiate flower development.

Amaryllis bulbs coated in colorful and decorative wax are available in many catalogs, stores, and garden centers.  Waxed amaryllis bulbs make excellent gifts because they are easy to care for and grow as they require no water or soil.  Simply place the bulb in bright, indirect light.  Flower stalks emerge in 4 to 6 weeks (sometimes less) utilizing the stored carbohydrates in the large bulb.  Rotate the bulb every few days to keep the stalk growing straight.  Often two, sometimes three or four, flower stalks will grow producing blooms for up to three weeks.  Remove each flower stalk as the last bloom on it fades.  Avoid purchasing waxed bulbs that have started to bloom or have spent flower stalks.  These bulbs may not bloom in your home or will have a greatly reduced length of bloom.

Waxed bulbs are intended to be grown as single-use bulbs.  When flowering is done, discard the bulb.  Remove the wax before composting as some waxes, as well as the glitter that is frequently embedded in the wax, may not readily break down in your compost pile. 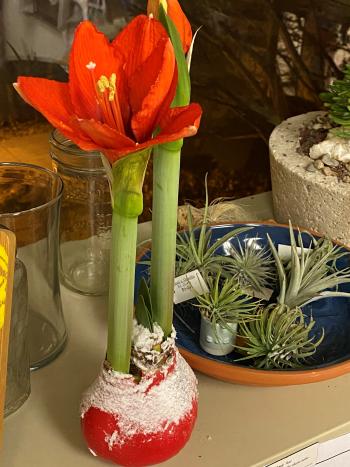 Can I Get My Waxed Amaryllis Bulb to Rebloom?

While it is not recommended that you save waxed bulbs, you can potentially get them to rebloom with diligent care.  Once the last flower stalk has faded, leaves will begin to slowly emerge.  Carefully remove the wax from the outside of the bulb.  Take special care to not damage any of the small emerging roots at the base of the bulb.  Sometimes these small roots are embedded in the wax and can be easily broken off if the wax is not carefully removed.

You may be surprised to see that the wax shell is now larger than the bulb inside. This is because stored carbohydrates in the bulb were used to produce flowers. With no water or soil available, the plant has a greatly reduced ability to replace those food reserves. This reduction in carbohydrates stored in the bulb causes it to shrink significantly in size.  This smaller bulb will require special care to recover and grow large enough again to produce a new flower stalk next year.

Once the wax is removed, inspect the bulb carefully for sunken, soft, or dark areas that indicate a disease problem.  Discard any bulb that shows signs of rot.  Pot up the bulb in the same way you would for a regular non-waxed bulb.  Use well-drained potting soil in a container 1 to 2 inches larger than the diameter of the bulb.  Position the bulb in the center and when finished the upper half of the bulb should be above the soil line.  Care for the bulb in the same way you would for a non-waxed bulb.  It is particularly important to provide adequate light and fertilization in the spring and summer months to promote growth and allow the plant to produce and store carbohydrates in the bulb.  After the bulb goes through dormancy in the fall, a new flower stalk should emerge and bloom.

It is not always possible to save waxed amaryllis bulbs and get them to rebloom.  Occasionally the bulb is so spent after flowering that it does not recover.  Sometimes the bulb grows healthy leaves but will not produce blooms the following year.  This is usually because the bulb has not built up enough carbohydrate reserves to flower.  Continue to grow and care for the bulb and flowers should emerge the following season. 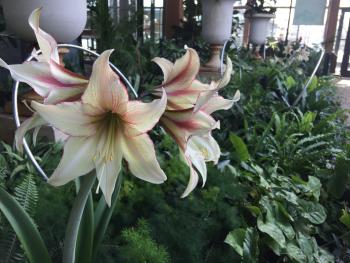