The territorial behavior of the male carpenter bee is both well-known and disconcerting.  Male carpenter bees dive at the heads and faces of homeowners and gardeners.  As an inquirer from Madison County recently put it, "The carpenter bees seem to know the moment we step outside.  They come straight up to you and buzz right in your face at a standstill - hovering and looking you straight in the eye.  They haven't harmed anyone but are a nuisance and scary nonetheless." It doesn't help that carpenter bees are big.  Body length is 19-23 mm, or slightly less than 1 inch.

Carpenter bees are solitary; each female works alone to burrow and provision a nest for her limited number of offspring.  Carpenter bees do not live in colonies or hives with a cast of thousands of worker bees to care for their colony and queen.

You may notice female carpenter bees coming and going from the ½-inch round holes bored into bare wood.  However, as described above, you are more likely to notice the males because they notice you!

Male carpenter bees hover around a nest site, flowers, or structures to defend their territory from other male bees.  Early in the season, they wait to mate with females as they emerge from old tunnels.  Later, they patrol the area to keep out perceived enemies.

Female carpenter bees have a stinger and could sting, but they must be substantially threatened or handled to do so.  The females are busy as a bee with more important work to do than sting you.  They are docile, peaceful, and easily ignored.

The harm caused by carpenter bees is primarily aesthetic and aggravation.  It is conceivable that drilling into rafters, deck joists, and other structural lumber could weaken the wood, but it would take significant activity over an extended period.  Tunneling by female carpenter bees can be precluded by painting bare wood or spraying or dusting nest entrances.

For more details about carpenter bees, see our online article at https://hortnews.extension.iastate.edu/carpenter-bees 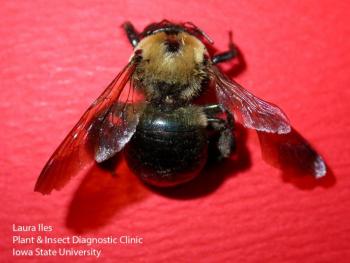 Links to this article are strongly encouraged, and this article may be republished without further permission if published as written and if credit is given to the author, Horticulture and Home Pest News, and Iowa State University Extension and Outreach. If this article is to be used in any other manner, permission from the author is required. This article was originally published on May 20, 2022. The information contained within may not be the most current and accurate depending on when it is accessed.