Brown Moths Around? They Might Be Hackberry Emperor Butterflies

For the past few weeks there has been an ivasion of brown "moths" in Iowa!  Roadways and yards have been covered; they are also landing on people. Everyone is asking, what is going on?! 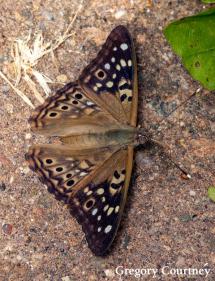 Well, those brown moths are actually butterflies. We tend to associate the color brown with moths and indeed many moths are brown, but there are also many brown butterflies. These butterflies are called the hackberry emperor butterfly. Like many other species of butterflies, they engage in a behavior called puddling. Puddling is when butterflies swarm around puddles, mud, or dirt and drink water and seek minerals and salts that are not present in flower nectar. This is also why they land on us—our sweat contains salts. 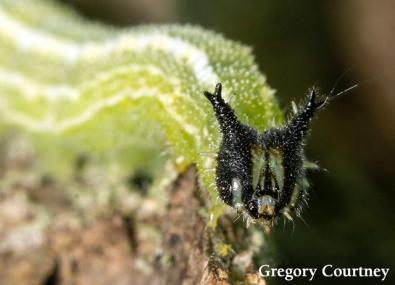 Hackberry emperor butterflies start out as eggs, then their caterpillars feed on hackberry foliage, when ready to form a chrysalis the caterpillars crawl to the ground to find a suitable location. They can cause significant defoliation of hackberry trees, but no long-term harm is expected as trees will put on more leaves.

Why are there so many this year?  We do not know. This is a question that entomologists get asked whenever there is an insect outbreak. There is research into the population cycles of some insect pests, but for most insect species the answer is simply that abiotic and biotic factors aligned in such a way that there was increased survival of eggs, larvae, pupae, and/or the adults. Abiotic factors are the non-living things that effect insect survival such as rainfall and temperature. Biotic factors are the living things that influence survival such as: competition, food availability, and the parasites, predators and disease that kill insects. When we see an insect outbreak, what we are observing is something closer to the population size the species is capable of if it were not for the high levels of mortality.

For now, enjoy the hackberry emperor butterflies as it is not likely we will see so many again next year. Check out a video below!

Links to this article are strongly encouraged, and this article may be republished without further permission if published as written and if credit is given to the author, Horticulture and Home Pest News, and Iowa State University Extension and Outreach. If this article is to be used in any other manner, permission from the author is required. This article was originally published on June 18, 2021. The information contained within may not be the most current and accurate depending on when it is accessed.