A is for Aroids! 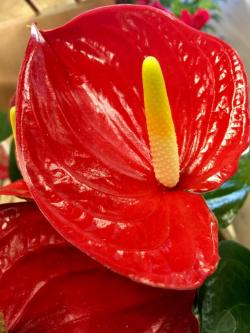 Aroids or arums are members of the Araceae family.  The Araceae family is large, with more than 100 genera and 3700 species of mostly sub-tropical monocots.  Many species are popular as houseplants, and a few are distinctive landscape plants.  This family of plants is diverse with varying mature habits, leaf sizes, shapes, and coloration.   Most members of this family have a similar and distinctive inflorescence (cluster of flowers).  The inflorescence consists of a spadix and spathe.  The spadix is shaped like a rod and often consists of clusters of female flowers near the base and male flowers near the tip. Surrounding the spadix is a leaf-like bract, called a spathe, that is sometimes colorful and showy.  The inflorescence may emit distinctly foul odors (Amorphophallus) and/or produce heat (Symplocarpus) in its attempt to attract pollinators.

You have probably seen or grown an aroid.  Common aroid houseplants include philodendron, pothos, Chinese evergreen, peace lily, dumb cane, and Swiss cheese plant.  Only a few aroids that are grown as houseplants have showy flowers.  Peace lily and Anthurium are aroids with showy spathes.  Calla lily and Jack-in-the-pulpit are landscape species with showy inflorescences.

Many aroids are grown as houseplants because of their beauty and adaptability to indoor conditions.  Most species prefer bright, indirect light.  Swiss cheese plant (Monstera) is the exception, as it prefers direct light, but other species in this family cannot tolerate more than a few hours of direct light each day.  They usually perform well in North or East facing windows.  Room temperatures between 65 and 85F are ideal, while temperatures below 60F can cause damage to the leaves of some species. While landscape species like calla lily (Zantedeschia), caladium (Caladium), and skunk cabbage (Symplocarpus) prefer consistently moist soils, indoor species thrive when allowed to dry out slightly between watering.  High humidity is beneficial, especially indoors during the winter months. Most indoor aroids benefit from a light application of fertilizer once or twice during the growing season.  Aroids as houseplants also thrive when slightly pot-bound; You can be a bit lazy and not repot plants every year into larger containers.

Aroids are a global family. Arisaema, the genus for Jack-in-the-pulpit, has species native to China, Japan, central Africa, Tibet, Thailand, Malaysia, India, Vietnam, Taiwan, Mexico, and North America (including Iowa).  While fewer aroids can be grown outdoors in Iowa, ones like Jack-in-the-pulpit should not be missed!

When planning your indoor or outdoor garden for 2021, consider growing some of these diverse aroids.  If you want to learn more about aroids, check out the podcast on Aroids from In Defense of Plants.  Staff from the Missouri Botanic Garden discuss collecting, propagating, maintaining, conserving one of the largest living collections of aroids in the world.

Air plants – members of the genus Tillandsia, are epiphytes that grow in air or outside of the soil.  Link to All About Air Plants HHPN

Aerate or Aeration - to add air to something.  Aeration is a common practice for lawns to allow air and water to penetrate through thatch or compacted soils.  Link to lawn aeration HHPN article

Aphids – Pear-shaped, soft-bodied insects come in a variety of colors and suck sap from garden and landscape plants.

Ants – Familiar but widely misunderstood and unappreciated insects that provide several ecological services in the garden and landscape. Link to In Defense of Ants

Links to this article are strongly encouraged, and this article may be republished without further permission if published as written and if credit is given to the author, Horticulture and Home Pest News, and Iowa State University Extension and Outreach. If this article is to be used in any other manner, permission from the author is required. This article was originally published on January 8, 2021. The information contained within may not be the most current and accurate depending on when it is accessed.