These are the times that try our souls.  But now is also the time that two of our most noticeable scale insects become apparent.

Magnolia scale is the largest scale insect in Iowa.  Swollen females on magnolia twigs and stems can be as large as ½ inch in diameter.  These scales produce vast quantities on honeydew (sugary excess plant sap passed through the insect) that coats the leaves, ground, and nearby plants.  Honeydew is food for others, including bees, wasps, flies, and sooty mold.  Sap loss caused by a large population of scales can cause magnolia branch dieback and possibly death of the entire plant.

For many years magnolia scale was a rare pest in isolated areas of Iowa.  However, in the past 20 years, the scale insect has been detected in widely scattered and dispersed areas of the state, from Davenport to Cedar Rapids, Ames and Jefferson.

Magnolia scales can be removed by hand on small, lightly infested plants, but it’s a sticky, disagreeable mess.  Systemic insecticides applied now applied as a drench around the root zone of infested plants will provide control of the scales ahead of egg hatch.  Contact insecticides in August will control crawlers.  More at https://hortnews.extension.iastate.edu/magnolia-scale

The cottony maple scale shows up every few years on the twigs of silver maple trees.  So far this summer, we’ve heard about cottony maple scale “outbreaks” in Dubuque, Linn, Buchanan, and Johnson counties.  “Outbreak” may be too strong a word.  It’s often one or a few trees that are heavily loaded with fluffy, white female egg sacs that look like popcorn on the twigs.

Cottony maple scale is associated with silver maple but may occur on other deciduous trees and shrubs.  Silver m 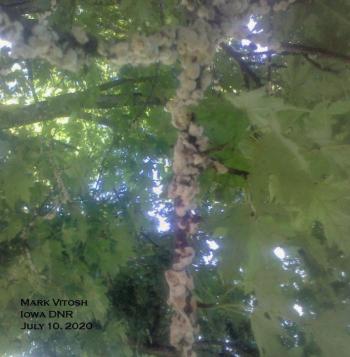 Weather and natural enemies keep the cottony maple scale populations low in most years.  Therefore, applied chemical controls are not recommended.  Insecticide applications may upset the natural balance of biological controls present in the trees (by killing predators and parasites) and prolonging the occasional outbreak into a more serious problem.

If treatment is warranted, the time to treat cottony maple scale is just after the eggs have hatched in early July.  Two treatments 10 days apart are usually needed.  Homeowners are encouraged to spray with insecticidal soap or horticultural oil (summer rate).  Soaps and oils only kill the pests on contact. Spray must be applied very thoroughly to cover the top and underside of the leaves to kill the scales. More at https://hortnews.extension.iastate.edu/cottony-maple-scale

Links to this article are strongly encouraged, and this article may be republished without further permission if published as written and if credit is given to the author, Horticulture and Home Pest News, and Iowa State University Extension and Outreach. If this article is to be used in any other manner, permission from the author is required. This article was originally published on July 10, 2020. The information contained within may not be the most current and accurate depending on when it is accessed.