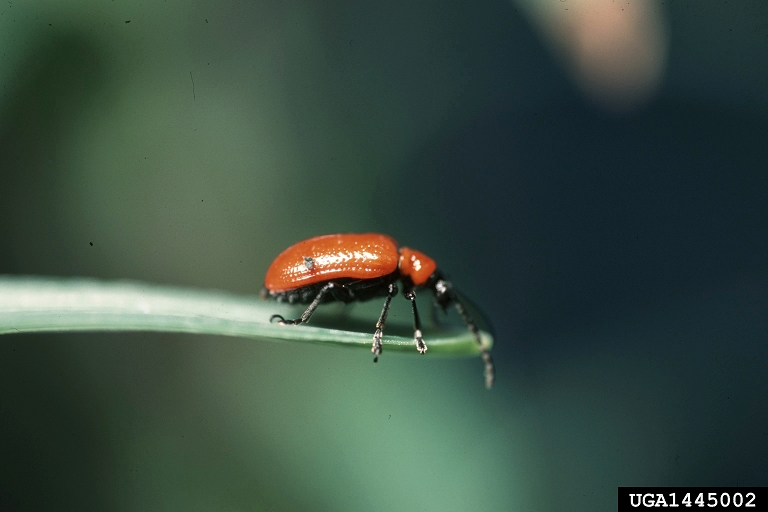 The Iowa State University Plant and Insect Diagnostic Clinic has confirmed a likely infestation of the lily leaf beetle, Lilioceris lilii, in Cedar Rapids based on photographic evidence and is asking for reports of the invasive insect.

This would be the first documented evidence of the beetle in Iowa, not long after the beetle was confirmed in Minnesota earlier this month. The lily leaf beetle, a native of Europe and Asia, first appeared in the U.S. in 1992, and most common in the Northeast.

The adult insects have a distinctively bright red body with a black head, and about ¼-inch-long. They have no spots, stripes or other markings. The larvae are greenish to orange in color, up to 3/8-inch-long and slug-like in appearance and are active from May to June.

The lily leaf beetles are present in the garden from May until September and feed on true lilies (Lilium spp.) and fritillaries (Fritillaria spp.). Adults chew holes in the leaves, feed on the stem, flower buds and flowers. The defoliation caused by the lily leaf beetle can severely damage plants.

They will also feed on lilies of the valley and Solomon’s seal but less often; however, daylilies (Hemerocallis spp.), canna lilies (Canna spp.) and calla lilies (Calla palustris) are not consumed by the invasive insect.

Links to this article are strongly encouraged, and this article may be republished without further permission if published as written and if credit is given to the author, Horticulture and Home Pest News, and Iowa State University Extension and Outreach. If this article is to be used in any other manner, permission from the author is required. This article was originally published on July 24, 2020. The information contained within may not be the most current and accurate depending on when it is accessed.