Psocids, also known as barklice, are small, soft-bodies insects commonly found on trees.  They usually go unnoticed because of their small size and low numbers, but occasionally, very large populations will develop and cause concern by their presence.  Such has been the case this summer with several inquiries in the past few weeks.

The take-home-message about barklice is that they did NOT cause whatever symptoms or maladies that prompted you to take a really close look at the tree.  The barklice are not feeding on the tree; they are not causing the leaves to turn color or fall off, and they did not cause loose bark or splits on the trunk.

The nickname “’barklice” is misleading because psocids are not lice nor do they have any strong resemblance to lice.  Psocids may be winged or wingless, and a mixture of both types will be present in the large assemblages mentioned.  The wings are held vertically above the body in a rooflike manner when the insects are at rest.

Psocids occur in damp locations, such as under stones, under loose bark of logs and firewood, in grass and leaves, on damp wood and on the trunks and foliage of trees and shrubs.  They feed on fungi, lichens and decaying organic matter.  They do not attack trees. They cause no harm or injury to the plants on which they are found.  Their presence and activity may be a nuisance but large populations are usually temporary and not of long-term concern.  There is no justification for insecticide treatment. 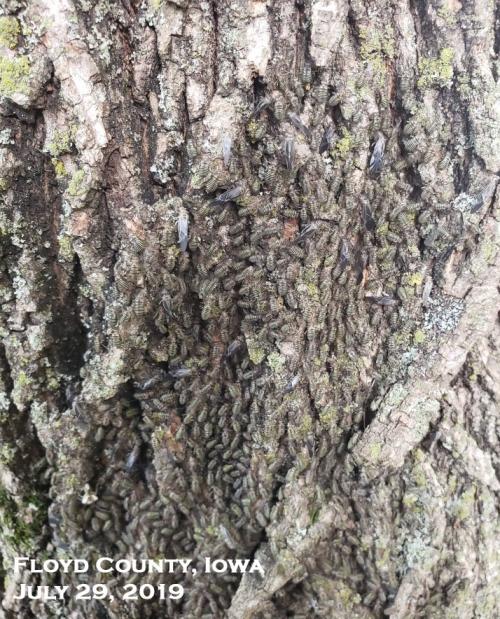 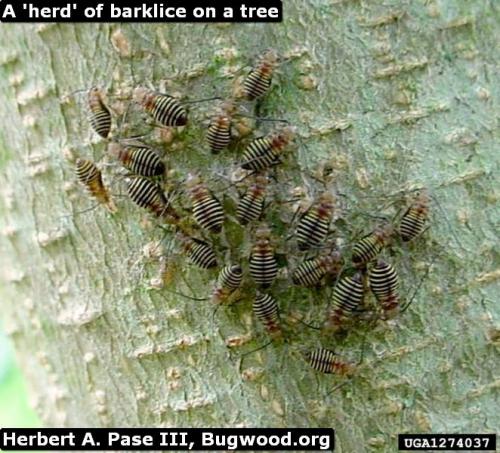 Links to this article are strongly encouraged, and this article may be republished without further permission if published as written and if credit is given to the author, Horticulture and Home Pest News, and Iowa State University Extension and Outreach. If this article is to be used in any other manner, permission from the author is required. This article was originally published on July 24, 2020. The information contained within may not be the most current and accurate depending on when it is accessed.