Division of Perennials in Spring

Herbaceous perennials are commonly divided for three reasons: to control size, to rejuvenate plants, and to produce additional plants.

Some perennials, such as garden peonies, can be left undisturbed for 50 or more years. Others need to be divided periodically to contain their spread. Perennials, such as gooseneck loosestrife (Lysimachia clethroides), obedient plant (Physostegia virginiana), and bee balm (Monarda didyma) are vigorous growers. They grow so rapidly that they begin to crowd out neighboring plants within a few years. Gooseneck loosestrife and other vigorous growers should be divided every two to three years. 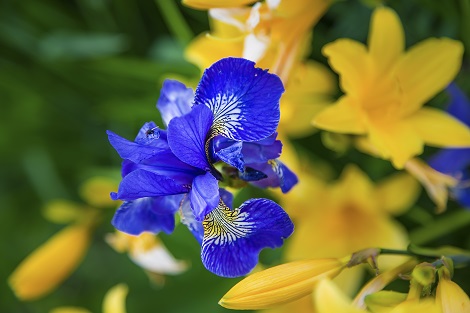 In contrast, the performance of some perennials, such as bearded iris (Iris hybrids), begins to decline after several years. If not divided every three to five years, bearded irises become overcrowded and don’t bloom well.  Declining perennials should be divided to rejuvenate the plants.

Finally, many gardeners like to divide perennials to produce additional plants for themselves or to give to others.

In early spring, dig up the perennials just as new growth begins to appear. Divide each plant clump into sections with a sharp knife.  Each division should contain several shoots and a portion of the root system. Immediately replant the divisions.  Keep the newly divided perennials well-watered through spring and summer.  Most newly divided perennials don’t bloom well until their second growing season.

Links to this article are strongly encouraged, and this article may be republished without further permission if published as written and if credit is given to the author, Horticulture and Home Pest News, and Iowa State University Extension and Outreach. If this article is to be used in any other manner, permission from the author is required. This article was originally published on March 27, 2020. The information contained within may not be the most current and accurate depending on when it is accessed.