Japanese Beetles are Spotty . . . As Usual

The same two questions have been common this past week:

Cool temperatures delayed the emergence of Japanese beetles in June, but heavy populations in some areas appear to be making up for it.  The good news is that we should be at the peak of emergence for JB adults.  Adults are typically present for 6 weeks from late June to mid-August, with the largest number out at about the middle of that time period.  Each beetle lives 3 or 4 weeks, but staggered emergence from infested sod keeps new beetles appearing over an extended period.  For more on JB emergence and longevity, see HHPN July 27, 2018.

More good news:  “Defoliated deciduous trees are not dead.”  Leaves from damaged fruit trees, crabapples, lindens, elms, etc. turn brown, curl up and fall off.  But the trees are not dead.  Put the chain saw down and walk away from the tree.  Defoliated trees are stressed so water as needed and avoid any further damage.  However, they will recover.

Why the spotty distribution?

Soil types, soil temperature, soil moisture and other factors we probably don’t fully understand, affect the numbers and distribution of JB.  We do know some areas are just luckier than others are, and arrival of JB in a specific landscape appears to be random.  Arrival, numbers and damage vary greatly from place to place and year to year.  The tremendous variation means with some places have none and others have an “outbreak.”

Did the Polar Vortex Kill JB?

In a word, no.  JB spend the winter as white grubs 4 or more inches deep in the soil. They were unaffected by the cold air above the snow.  However, 5 winters ago, we did surmise that a double whammy of fall drought followed by a longer and deeper frost in the soil did reduce the population.  As many have noticed, they bounced right back.

See our HHPN Encyclopedia article on Japanese beetle for details on appearance, damage and management options.

Controls on trees are specifically outline in this article from 2014.  Note that since this article was written the rules have changed and it is now illegal to apply imidacloprid insecticide to Linden, basswood, or other Tilia species.

We continue to monitor the locations of the Japanese beetle in Iowa.  See map below.  If you observe adults in a county where they have not yet been reported, please send images to insects@iastate.edu.  List the location and date in your message. 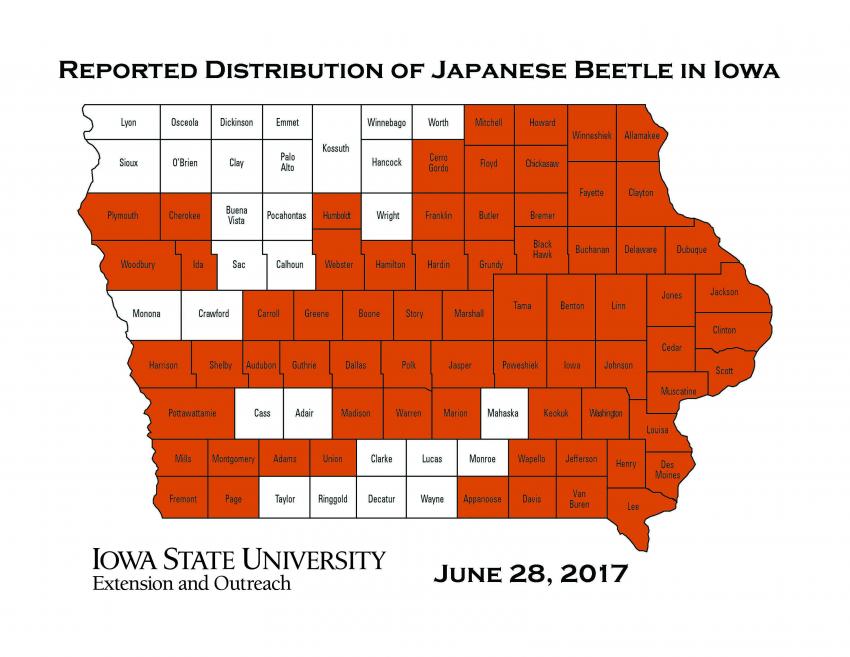 Links to this article are strongly encouraged, and this article may be republished without further permission if published as written and if credit is given to the author, Horticulture and Home Pest News, and Iowa State University Extension and Outreach. If this article is to be used in any other manner, permission from the author is required. This article was originally published on July 16, 2019. The information contained within may not be the most current and accurate depending on when it is accessed.