Late June to early July is the time of year when populations of invasive and destructive jumping worms (Amynthas spp.) will have built to detectable levels and may be noticed under mulch and leaf litter or in potted plants.  Jumping worms have been confirmed in seven Iowa counties.  See the accompanying map.

We assume jumping worms are much more wide-spread than reports so far indicate and we appreciate all reports of additional areas of infestation.  If you believe you might have jumping worms in a previously unreported county, please send videos and images of possible infestations to insects@iastate.edu.

See our online article for more details about jumping worms, including the potential for harmful ecological effects, especially on woodland slopes.

Jumping worms are also known as crazy worms or snake worms, names that describe their wild movement. They violently writhe and squirm when disturbed and move more like a snake than an earthworm.  They are 3 to 5 inches long (some up to 7 inches in length) and dark brown to gray in color rather than reddish-brown.  They are darker and smoother than our usual earthworms such as nightcrawlers and garden worms.

There is no cure or eradication for earthworms (European or Asian). Therefore, the goal is to prevent their spread and monitor for their presence.  To prevent their spread do not move compost, mulch and top soil from potentially infested points of origin. Do not move plants from the infested counties and carefully inspect nursery plants prior to planting. 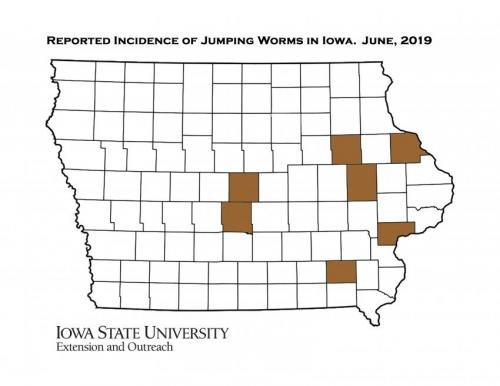 Links to this article are strongly encouraged, and this article may be republished without further permission if published as written and if credit is given to the author, Horticulture and Home Pest News, and Iowa State University Extension and Outreach. If this article is to be used in any other manner, permission from the author is required. This article was originally published on June 21, 2019. The information contained within may not be the most current and accurate depending on when it is accessed.