The green-striped mapleworm is the caterpillar stage of the rosy maple moth, Dryocampa rubicunda.  This is not a common pest in Iowa with a small handful of reported maple tree defoliations over the past 40 years.  The caterpillars are as unique as the moths are attractive.  Caterpillars grow to almost 2 inches in length and have distinctive markings of 7 dark-green longitudinal stripes and a pale-green body and two dark "horns" at the front and four short spines at the back of the body.  See photo.

The medium-sized rosy maple moth is about an inch long with delicate pink and yellow coloration.  BugGuide image.

Until this year and last year, the most recent report was from Fremont County in 2008.  Beginning last summer and continuing to this year there have been more than 14 inquiries and reports about maple tree defoliation along the Wapsipinicon River, southwest of Independence in Buchanan County.  Reports of heavy defoliation started July 2 and continued through this week.

Part of the reason we don't hear much about the green-striped mapleworm is that has traditionally been a "southern" pest.  However, the moth has a wide distribution with reports on BugGuide from Texas to Ontario and Quebec to Florida.

Presumably, natural controls such as parasitoids and 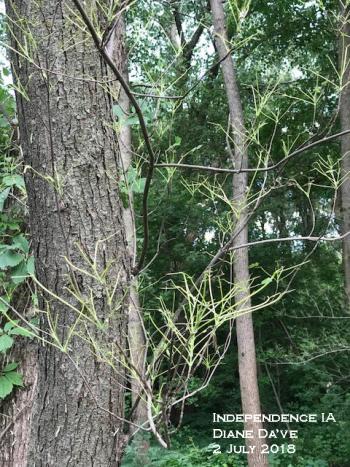 predators keep this pest at low numbers in most areas and most of the time.  Other factors related to the life cycle are probably in play but not known.  Consequently, it is not clear why outbreaks occur in isolated locations.  The experience this year matches that of previous years; infestations and defoliation are common along rivers.

As we know with Japanese beetles and other hardwood defoliators, the loss of foliage is largely aesthetic; trees usually survive and recover, but some loss in growth and dieback in the crown may occur.  Defoliation of deciduous trees is alarming but not fatal.  The trees will survive.

From University of Illinois, 1999: “By the time they are noticed, the caterpillars are too large to be effectively controlled.”  Small trees and small larvae could be sprayed with Bacillus thuringiensis insecticide but the bacterium will not control large caterpillars and spraying large trees and large areas is not practical.  Green-striped mapleworm caterpillars feed in clusters while small.  Larger larvae feed individually and crawl to the ground when fully grow in order to pupate in the soil.  Insecticides do not help after the trees are defoliated and the caterpillars are grown and wandering.  In short, do not spray, now.

It's not clear there will be a second generation of green-striped mapleworms in northern Iowa as there is down South.   Our suggestion is to check trees for second generation in 2 weeks and spray small trees if warranted.

Links to this article are strongly encouraged, and this article may be republished without further permission if published as written and if credit is given to the author, Horticulture and Home Pest News, and Iowa State University Extension and Outreach. If this article is to be used in any other manner, permission from the author is required. This article was originally published on July 13, 2018. The information contained within may not be the most current and accurate depending on when it is accessed.