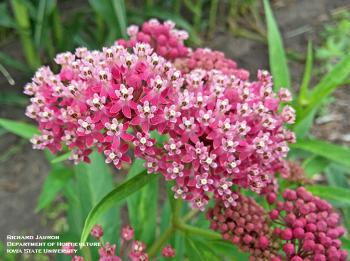 When selecting perennials, it’s important to choose plants that are suitable for the site.  Wet locations can be challenging, but they also provide gardening opportunities.  The following native perennials perform well in moist to wet soils in partial to full sun.  Possible planting sites include water gardens, rain gardens, pond banks, landscape beds, and naturalized areas.

Swamp milkweed (Asclepias incarnata) is typically found in prairie potholes, at the edges of marshes, and in wet ditches.  Swamp milkweed has 3- to 6-inch-long, lance-shaped leaves, grows 3 to 4 feet tall, and blooms from July through August.  The vanilla-scented flowers are pale pink to rose-purple.  The flowers are followed by 3 to 4 inch pods which contain numerous plumed seeds.  Swamp milkweed (along with other milkweed species) is a food source for monarch butterfly larvae.  Another common name is rose milkweed.

Swamp milkweed is an excellent perennial for low sites or other moist locations in the landscape.  Plants tolerate short dry periods, but prefer soils that are consistently moist or wet.  Swamp milkweed requires full sun.

White turtlehead (Chelone glabra) is most often found along streams, marshes, and other wetland areas in the eastern portion of the state.  Plants grow 2 to 3 feet tall and produce creamy white flowers (sometimes tinged with pink) on dense, terminal spikes in August and September.  The snapdragon-like flowers somewhat resemble the head of a turtle, hence the common name of turtlehead.  Pink turtlehead (Chelone obliqua var. speciosa) has rosy pink flowers.  It is extremely rare in Iowa and limited to counties along the Mississippi River

Joe Pye weed (Eutrochium maculatum) is a tall, native perennial.  It is most commonly found in moist meadows and marshes in northeastern Iowa. Plants have serrated, lance-shaped leaves, purple spotted stems, and grow up to 6 feet tall.  Dusty rose-colored flowers are produced in dense, flat-topped clusters in late summer.  The flowers are highly attractive to butterflies and bees.

Joe Pye weed performs best in moist to wet soils in full sun.  The plant’s large size and its propensity to spread limit its use to large landscapes and naturalized areas.

Rose mallow (Hibiscus laevis) is most often found in the southern half of Iowa in wet soils along streams, rivers, ponds, and marshes.  Plants grow 4 to 6 feet tall.  Leaves are up to 6 inches long and have 3 to 5 lobes.  In August and September, plants produce hollyhock-like, five-petaled flowers.  Flowers vary from pink to nearly white and have reddish purple throats.

Southern blue flag (Iris virginica var. shrevei) grows in wet soils along lakes, marshes, and streams.  It is most commonly found in the north central portion of the state.  Plants grow 2 to 3 feet tall and have narrow, sword-shaped leaves.  Plants bloom in late spring.  Flowers vary from light blue to purple, but are most often violet blue.  The 3 drooping “petals” have yellow midribs.

Southern blue flag grows best in moist to wet soils in full sun.  Plants can be successfully grown in home landscapes in areas that are consistently moist.  Southern blue flag spreads by rhizomes and develops into dense colonies when located in favorable growing sites.

Several species of Liatris are native to Iowa.  While most species prefer dry sites, prairie blazing star (Liatris pycnostachya) is typically found in moist prairies and meadows.  Prairie blazing star grows 3 to 4 feet tall, has narrow, lance-like leaves, and blooms in mid- to late summer.  Pinkish purple flowers are produced on 12- to 18-inch-long, upright spikes.  Flowering begins at the top of the spike and moves downward.

One of the most striking native perennials is the cardinal flower (Lobelia cardinalis).  It is found in moist locations a 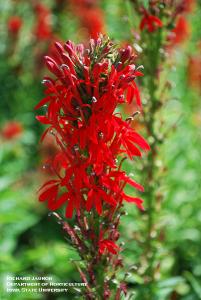 long streams and marshes and in moist alluvial woods.  Plants have lance-shaped, finely toothed leaves, grow 2 to 3 feet tall, and produce terminal spikes of cardinal red flowers.  The flowers are attractive to butterflies and hummingbirds.  Plants are typically short-lived perennials.

The cardinal flower requires moist to wet soils.  Plants can be successfully grown in full sun to partial shade as long as the site has a uniformly moist soil.  Possible landscape sites include water gardens, rain gardens, and naturalized areas.

Obedient plant prefers moist, well-drained soils in full sun.  However, plants will tolerate partial shade.  The obedient plant is a rhizomatous perennial that spreads aggressively in favorable locations.  In landscape beds, plants should be dug and divided every 2 to 3 years to contain their spread.

Links to this article are strongly encouraged, and this article may be republished without further permission if published as written and if credit is given to the author, Horticulture and Home Pest News, and Iowa State University Extension and Outreach. If this article is to be used in any other manner, permission from the author is required. This article was originally published on February 9, 2018. The information contained within may not be the most current and accurate depending on when it is accessed.