For only the second time within memory we have received a report of cottony grass scale, Eriopeltis festucae, damaging turfgrass in Iowa.  Our one previous experience was 8 years ago in 2009 and coincided with 4 years of reports in Minnesota.

An infestation of cottony grass scale (CGS) appears as tiny cottony sacs that resemble cotton swabs attached to the grass blades. The more noticeable symptom is the presence of a distinctive mower wheel track pattern.  The turfgrass remains green where the wheels run, but the area between the tire-tracks turns yellow to tan because of the abundance of sap feeding scale insects in the area between the tires.

A survey in Minnesota in 2008 found that infestations of CGS were most common in highly maintained lawns receiving full sun exposure, presumably dominated by Kentucky bluegrass, and receiving high nitrogen fertility and regular irrigation.  That describes the commercial landscape of the current reported infestation in LeMars Iowa.

Brown streaks between the tire tracks first showed up around August 1 and got worse until August 17.  When the diagnosis was made the mowing pattern in the narrow, infested area was changed.  After just one mowing traveling in different tire tracks the look of the area changed in one week.

There is still not much known about this a little-known and little-reported turfgrass insect pest. We still don’t have a clear picture of this pest’s biology, regional distribution and potential IPM strategies. Interestingly, one management practice that was reported in the University of Minnesota survey supports the strategy mentioned above.  Observations suggest the insect can be destroyed by crushing.  In Minnesota, turfgrass companies reported that rolling the infested area with a sod roller or the roller on a lawn aerifier produced dramatic improvement with two to three weeks.  It is uncertain if crushing is as obvious an answer as it seems.

Recovery of lawns and uncertainty about what or when to spray insecticide lead us to not recommend spraying. 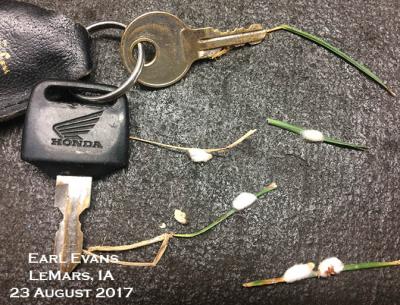 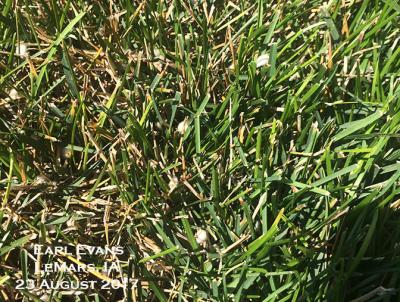 Links to this article are strongly encouraged, and this article may be republished without further permission if published as written and if credit is given to the author, Horticulture and Home Pest News, and Iowa State University Extension and Outreach. If this article is to be used in any other manner, permission from the author is required. This article was originally published on August 25, 2017. The information contained within may not be the most current and accurate depending on when it is accessed.