Recent requests for information from Master Gardeners and others have prompted us to share what we know about "jumping worms," another in a long list of invasive species that could have a negative impact on our landscapes and natural areas.  In the words of Gilda Radner, "It's always something. If it isn't one thing – it's another."

Jumping worms (Amynthas spp.) are among the approximately 6,000 species of terrestrial earthworms in the world.  Jumping worms are also known as crazy worms or snake worms, names that describe their wild movement.  They violently writhe and squirm when disturbed and move more like a snake than an earthworm.  Watch the activity in this YouTube video.

Jumping worms are native to Southeast Asia and are believed to have arrived in North America with potted plants, nursery stock or soil.  Jumping worms have been in the southeastern U.S. for many years, including in the Great Smoky Mountains.   In the past few years they have been found in Illinois and Wisconsin.

As far as we know, jumping worms have not been reported in Iowa, but with the ease of movement as fishing bait and within plants and soil, it's probably only a matter of time.  Jumping worms are easy to spread because they spend the winter in the ground as small, pinhead-size, round, black or brown cocoons (earthworm cocoons contain eggs) that can move with soil, plants, mulch or stuck to your shoes.

Jumping worms are 3 to 5 inches long (some up to 7 inches in length) and dark brown to gray in color rather than reddish-brown.  They are darker and smoother than our usual earthworms such as nightcrawlers (Lumbricus terrestris) and garden worms.  Jumping worms have a milky-white to gray clitellum (the band around the body of an earthworm) that is smooth, not raised above the body.  The clitellum completely encircles the body unlike on European earthworms where the clitellum does not wrap entirely around the worm.

Jumping worms are surface-dwellers; they consume leaf litter and organic matter at the soil surface.  Once established, populations can build quickly.  They can out-compete and push out the other earthworms and degrade ecosystems, especially forests and woodlands by stripping the soil surface of protective organic matter.

For a general overview of the harmful ecological effects of earthworms, see the Minnesota Department of Natural Resources website, where you can download a "Contain Those Crawlers" poster.

It appears that jumping worms do not survive as worms through the winter in the Midwest.  When the worms reproduce in the fall they produce cocoons that drop to the soil and survive the winter.  The cocoons hatch to start the cycle over and the population builds rapidly through two generations per season.  Jumping worms are parthenogenic; each worm can reproduce on its own without mating.  Jumping worms reach maturity within 60 days of hatching.  Adult jumping worms do not become apparent until late June and early Jul and populations are largest in early fall.

There is no cure or eradication for earthworms (European or Asian).  Therefore, the goal is to prevent their spread and monitor for their presence.  Here are tips from the Wisconsin DNR: 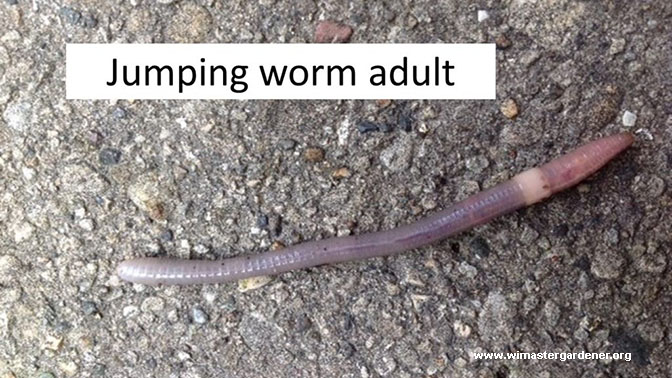 Links to this article are strongly encouraged, and this article may be republished without further permission if published as written and if credit is given to the author, Horticulture and Home Pest News, and Iowa State University Extension and Outreach. If this article is to be used in any other manner, permission from the author is required. This article was originally published on May 5, 2017. The information contained within may not be the most current and accurate depending on when it is accessed.