Three species of hydrangea are commonly grown in Iowa.  Pruning practices are based on the growth and flowering characteristics of each species.

The smooth hydrangea (Hydrangea arborescens) grows 4 to 5 feet tall.  Smooth hydrangeas bloom on new growth.  Plants produce white flowers in flat to roundish clusters in late spring and summer.  'Annabelle' (introduced in the early 1960's) is the most widely grown cultivar.  Newer cultivars include Incrediball® and Invincibelle® Spirit.  Smooth hydrangeas can be pruned back to the ground in late winter/early spring.

The panicle hydrangea (Hydrangea paniculata) is a large shrub that grows to a height of 10 to 12 feet.  Panicle hydrangeas bloom on new growth.  Plants produce cone-shaped flower clusters in late summer.  Flowers are initially creamy white, but gradually change to pink or dark rose.  Numerous cultivars, such as 'Grandiflora' (commonly known as PeeGee hydrangea), 'Tardiva,' 'Limelight,' and Vanilla Strawberry™ are available.  The size of panicle hydrangeas can be reduced by selectively removing a few branches in March or early April.  Rejuvenation pruning (removal of several of the largest stems near ground level) of large, old shrubs can also be done in late winter/early spring.

Numerous cultivars of bigleaf hydrangea (Hydrangea macrophylla) are available.  Flower color is determined by soil pH.  In acidic soils, flowers are blue.  Flowers are pink in alkaline soils.  Most older cultivars, such as 'Forever Pink' and 'Nikko Blue,' bloom strictly on the previous year's growth.  Unfortunately, 'Forever Pink,' 'Nikko Blue,' and most older cultivars do not bloom well in Iowa as plants often die back to the ground in winter.

For maximum bloom, wait until the shrubs begin to leaf out before pruning bigleaf hydrangeas.  When growth appears, prune out all dead wood. 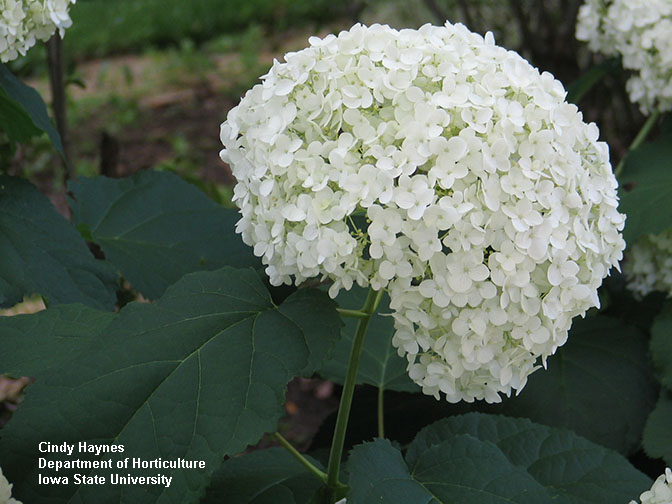 Links to this article are strongly encouraged, and this article may be republished without further permission if published as written and if credit is given to the author, Horticulture and Home Pest News, and Iowa State University Extension and Outreach. If this article is to be used in any other manner, permission from the author is required. This article was originally published on March 23, 2017. The information contained within may not be the most current and accurate depending on when it is accessed.