By Ryan Adams, Department of Horticulture

Tall fescue is a cool season grass that originated in Europe and was introduced into the United States during the early 1800s. It is slowly becoming a more popular choice in Iowa. This type of grass turns green in mid-spring and maintains color into late fall. Tall fescue has the highest heat, traffic, and drought tolerance of the cool season grasses. It is well adapted to wet soils, partially shaded sites, and is often used where a low-maintenance lawn is desired. Tall fescue will form a deep root system tolerant of clay and alkaline soils. Tall fescue also has a moderate tolerance of cold temperatures, and is suitable for a majority of Iowa winters below U.S. Highway 20.

Tall fescue is medium- to dark-green in color and coarse textured. It is a bunch-type grass and forms a coarse, clumpy appearance when used alone. The new, improved turf-type varieties have finer leaf texture, denser growth habit, and possess weak rhizomes (Photos 1 & 2). Tall fescue has distinct longitudinal lines (venation) on the upper sides of its leaves.  Key identifying characteristics also include rolled vernation and a pointed leaf tip.

The best time to seed turf-type tall fescue in Iowa is between mid-August and mid- to late September. However, lawns can be successfully seeded as late as late September in central Iowa and early October in southern Iowa. Late summer planting is preferred to spring seeding because seeds germinate and grow rapidly in the warm soil. The warm days and cool nights provide ideal conditions for seedling growth. Tall fescue seed germinates in five to ten days under favorable conditions.  Another option is late April to early May seedings. Seedlings are must reach full maturity before hot summer weather, making the establishment window narrow. Spring seed germination is slow when soil temperatures are below 50⁰F. Weed competition from annual grass such as crabgrass, is also increased in the spring.

The recommended seeding rate is 7-9 lb. per 1,000 square feet. A mixture of tall fescue (90-95%) and Kentucky bluegrass (5-10%) will help provide a uniform establishment. Damaged tall fescue areas are slow to recover and may need to be reseeded.   For more information on tall fescue seeding, refer to the Iowa State University Extension and Outreach publication, “Establishing a Lawn from Seed” (PM 1072).

Tall fescue’s excellent drought and traffic tolerance, coupled with its bunch-type growth, can cause a clumpy and uneven lawn when subjected to traffic and insufficient water. Should clumping become a problem, interseed with additional tall fescue and provide temporary irrigation to regain adequate turf density. Common and improved types of tall fescue need interseeding every three to five years to reduce the clumpy appearance. Core aerification presents an ideal time for interseeding.

Tall fescue has a high growth rate and requires more frequent mowing (every five to six days) compared to Kentucky bluegrass’s weekly mowing (Photo 3). Tall fescue maintained at 3 inches rarely has weed problems. The improved varieties can handle lower mowing heights, but the weed pressure will increase. The presence of weeds is frequently a sign of a thin or weakened turfgrass. Weeds are often the result of improper cultural practices that stress the turfgrass, giving weeds a competitive edge. Weed control should start and end with the development of a dense, healthy, competitive tall fescue lawn. Proper tall fescue maintenance is the best weed control. For more information, refer to the ISU Extension and Outreach publication, “Home Lawn Care: Weed Control” (PM 930).

Masked chafers, Japanese beetles, and June beetles (Junebugs) are the most common grub species to attack Iowa lawns. Annual grubs such as masked chafers and Japanese beetles lay their eggs in the spring and hatch in the summer. The larvae begin to feed on the root systems in August and these two species are commonly referred to as “fall grubs,” because the majority of damage occurs in the fall.

June beetle grubs are larger than those of the Japanese beetle and the masked chafers.  They have a three-year life cycle and are frequently referred to as “summer grubs,” because damage happens in the summer.

Although rare in Iowa, sod webworms, cutworms, and other pests may also damage tall fescue lawns. Apply insecticides only when the pests are the cause of the damage.

Water - The advantages of tall fescue are its ability to handle heavy traffic, hot temperatures, and drought. The new, improved varieties have a fine texture and are generally more aesthetically pleasing. With the introduction of new tall fescue varieties, it is considered for low-maintenance lawns with limited access to water. It is important to consider that while tall fescue can be used as an alternative to an adequate irrigation system, it would be a mistake on lawns where high quality turf is desired. The key point here is not to discourage the use of tall fescue, but instead to point out that temporary irrigation is necessary regardless of species choice. Watering as little as three to five times during the summer may be sufficient to maintain a high quality tall fescue lawn.

Fertilizer - A single application of fertilizer in late October/early November containing 1 lb. of nitrogen (N) per 1,000 square feet may be adequate for low-maintenance tall fescue lawns. Highly maintained lawns may need additional fertilizer in the spring (0.5 – 0.75lb./N per 1,000), September (0.75 – 1 lb. /N per 1,000), and a late October/early November (0.75 – 1 lb. /N per 1,000). To avoid overstimulation of the grass, apply lower rates in the spring. Overstimulation of grass may result in increased occurrences of the fungal disease known as leaf spot.  It also will deplete stored food reserves, making the grass susceptible to heat and drought stress. The number of applications depends on the desires/expectations of the homeowner, soil type, cultural practices, and other factors.

Aerification - Thatch is an intermingled layer of living and dead plant material that accumulates above the soil surface and is usually not a problem in properly managed tall fescue lawns. Proper balance of thatch requires a combination of management practices. These include preventing thatch buildup by reducing plant growth, adding only the necessary nitrogen fertilization, mowing consistently, and removing thatch mechanically.

A core aerator punches hollow tines into the soil and removes soil cores roughly the size of an index finger. Core aerating does not remove large amounts of thatch. Rather, it is an effective means of preventing thatch from developing and reducing soil compaction. Aeration and power raking services are available from professional lawn care companies and the machines can be found at rental companies.

Overall, the new turf-type tall fescues offer a great low-maintenance alternative to Kentucky bluegrass, and are recommended in non-irrigated lawns across central and southern Iowa. If Kentucky bluegrass or perennial ryegrass has failed due to the lack of water and summer droughts, it may be time to seed tall fescue (Photo 4). 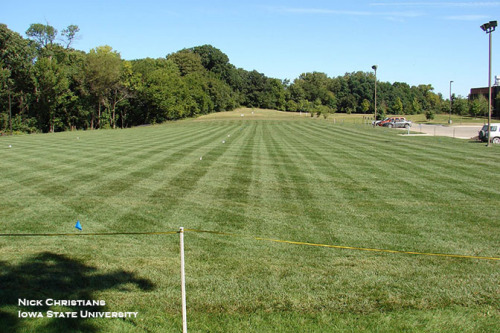 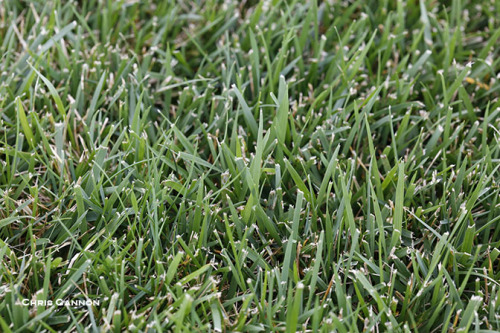 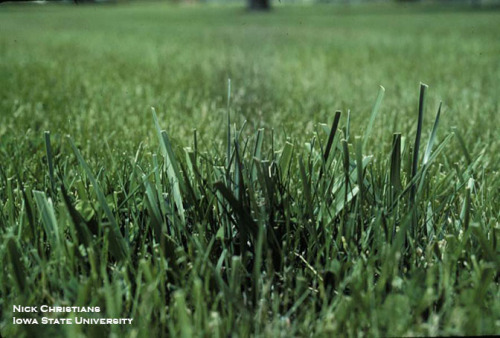 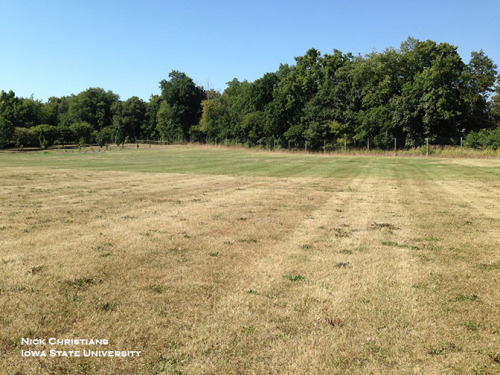 Links to this article are strongly encouraged, and this article may be republished without further permission if published as written and if credit is given to the author, Horticulture and Home Pest News, and Iowa State University Extension and Outreach. If this article is to be used in any other manner, permission from the author is required. This article was originally published on November 13, 2015. The information contained within may not be the most current and accurate depending on when it is accessed.