By Laura Jesse and Donald Lewis, Plant & Insect Diagnostic Clinic
It is that time of year again!  The lady beetles are responding to changes in day-length and temperatures and beginning their annual migration to locate good overwintering sights.   They follow their instinctive behavior and fly to sunny, exposed surfaces.  The time of flight varies but is usually from mid-September through October (depending on weather). Light colored buildings and walls in full sun appear to attract the most insects.

How bad will the lady beetles be this year?

Many factors will influence how many multicolored Asian lady beetles (MALB) are out there to invade our homes this year.  Insects suffer from diseases, just like humans, so outbreaks of viral, bacterial and fungal infections among the insects will the affect numbers of lady beetles.
The amount of food is also important.  When food is plentiful more insects survive and reproduce.  MALB eat aphids and other plant pests, so when those insects have good years, so does the lady beetle.
Finally, the weather will also influence the number of lady beetles, and we all know how unpredictable the weather is.  Weather will indirectly affect lady beetles by determining how much food is available.  Weather also influences how many MALB survive, and when and how they many will migrate to the exposed sunny side of the house.
As you can see, with so many variables in the big complex world, there is no simple answer.

How did the multicolored Asian lady beetle (MALB) get to Iowa?

The MALB was never released in Iowa.  It traveled here by flying from other states.  How the Asian lady beetle got into the U.S. is controversial.  Intentional releases of this species were conducted in southern and eastern states for many decades starting in the 1920’s.  All these releases were carefully monitored and after the releases no MALB were found.  It was believed that the MALB did not establish in the U.S.
Then, in 1988 a population was found near New Orleans, LA.  No releases of the Asian lady beetle had been made in Louisiana, so it is believed the beetles arrived accidentally off of a ship.
It is hard to believe that an insect that is so plentiful now only arrived in 1988, but other insects have demonstrated the ability to increase population size and move rapidly, so it is possible.

Is the multicolored Asian lady beetle a ladybug?

Yes.  All ladybugs are lady beetles and vice-versa.  Entomologists usually call ladybugs lady beetles because they are beetles, not bugs.  For a glimpse at the dizzying array of ladybugs in the upper Midwest, see The Ladybugs of South Dakota poster from the Lost Ladybug Project.

Is the multicolored Asian lady beetle and the Japanese beetle the same thing?

No.  The Japanese beetle (Popillia japonica) is a plant-feeding Junebug with the distinction as the worst landscape pest in America because it occurs in large numbers and eats plants as both the adult and larval stages. Japanese beetles devour the foliage, flowers, and fruit from more than 400 species of plants.  For a comparison of these two beetles with similar names, see HHPN, November 5, 2008.

Do we have native ladybugs/lady beetles in Iowa?

The soybean aphid is commonly blamed for high MALB numbers.  In fact, the first year we had soybean aphids in Iowa coincided with a good year for MALB.  However, we had already had MALB in Iowa for 6 years before the soybean aphid arrived.
MALB migrates to overwintering spots (often our homes) on the first warm day after the first frost.  This is usually sometime in mid to late October.  Soybeans are also being harvested at this time.  However, by the time soybeans are harvested the plants are very dry and there is no food in the soybean fields for lady beetles.  MALB have probably moved out of the soybean fields long before harvest, but we don’t see them until their migration is triggered by weather and shortening day lengths.

How do I prevent multicolored Asian lady beetle from getting into my house?

If you have had a problem with MALB being attracted to your house for the past several years, it is likely you will have a problem this year.
To prevent the lady beetles from getting indoors, start by sealing cracks around windows, doors, and where utilities enter the house.  Screen can be placed over attic vents.  If you have consistently had a severe problem you might consider using an insecticide on the outside of your house.  Ohio State University researches have found that lamda-cyhalothrin, deltamethrin, and bifenthrin work the best.  You can find them at your local garden centers.  Read and follow label directions when you apply pesticides.
Sealing cracks and insecticide treatments must be done before the lady beetles migrate.  Once the lady beetles get indoors the practical thing to do is vacuum them up.

Do ladybugs lay eggs in my walls?

No.  They do not lay eggs or reproduce at all in your house.  The beetles that accidentally crawl into your house during winter and spring are the same individuals that arrived in October. 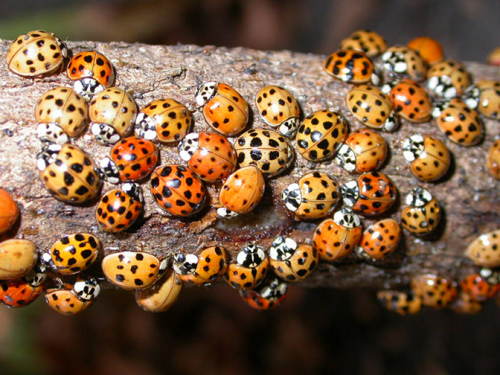 Lots of MALB showing the variation in color and spot size/density.

Links to this article are strongly encouraged, and this article may be republished without further permission if published as written and if credit is given to the author, Horticulture and Home Pest News, and Iowa State University Extension and Outreach. If this article is to be used in any other manner, permission from the author is required. This article was originally published on October 23, 2015. The information contained within may not be the most current and accurate depending on when it is accessed.