Fall Nuisance Invaders Are On the Move

By Erin Hodgson, Department of Entomology and Laura Jesse, Plant & Insect Diagnostic Clinic
As the days grow short, temperatures cool and plants in the landscape senesce, many insects and arthropods move to find overwintering habitat. Sometimes these animals seek out shelter in cracks and crevices of human structures such as houses and storage buildings. Common invaders include boxelder bug, lady beetles, millipedes, crickets, clover mite, pine seed bug and spiders. Pests enter structures accidentally and are generally harmless to people and property. Invaders do not sting, carry disease, reproduce or feed on people, pests, houseplants, stored food products or furnishings. Sometimes, invaders can stain fabrics, secrete foul odors or trigger allergens.
The preferred management for accidental invaders is to prevent them from entering the structure in the first place. Make sure windows and doors fit tight; replace screens on windows and vents; seal other openings around the foundation, pipes, wires and chimneys; and keep siding, eaves and soffits in good condition.  Remove and discard any pests that enter a structure with a vacuum.
Insecticide application for fall-invading pests is a less desirable option, as these products are short lived and can have non-target risks. Pesticide barriers can supplement exclusion tactics but multiple treatments may be necessary depending on pest abundance. Treat the southern and western sides of structures, where insects are most common. Insecticides must be applied before pests begin to enter buildings to be effective (e.g., September to mid-October). Direct application of insecticide to pest clusters outside of buildings may reduce the outdoor population and limit the number that will get into the house. Begin spraying as the insects congregate in late summer and repeat as necessary
Common fall accidental invaders
Multicolored Asian lady beetles: The multicolored Asian lady beetle is 1/3 inch in length; dome-shaped; yellowish-orange to red with variable black spots on the back. Deep orange is the most common color and the number of visible spots varies. The black “W” shaped mark by the head is the best way to identify them. These insects accumulate on the sides of buildings and wander indoors during the fall. Asian lady beetles are a beneficial biological control in trees, fields and gardens during the summer.
Boxelder bugs:   Boxelder bugs are black and red and about ½ an inch long.  They often occur in clusters with the nymphs appearing bright red as the black wings do not cover the abdomen until they are adults. Boxelder bugs are often associated with boxelder trees, but can feed on a variety of plant species.
Millipedes: There are two types of millipedes that commonly come into homes.  The most common is about 1-1 1/2 inches long and dark brown.  It coils up when disturbed or dead.  The second common species of millipede is called the flat-backed millipede or garden millipede.
Crickets: There are several species of field crickets ranging in size from 1/4 to 3/4 inch, but the best known is the black field cricket, a large, shiny black insect. Like other accidental invaders, field crickets spend most of their life outdoors where they feed, grow, develop and reproduce. Only during a limited portion of their life cycle do they wander indoors by mistake and create an annoyance.
Clover mites:  These small mites are only 1/64th inch long, soft, oval, and flattened from top to bottom. They vary in color from rusty brown to dark red. A distinguishing characteristic is the very long pair of front legs that extend forward like antennae as the mites crawl.  When crushed they can leave a permanent brownish stain.
Pine seed bug:  The pine seed bug is about 1 inch long, elongate in shape and dull reddish brown in color. It appears pointed at both ends; the antennae are almost the length of the body and are obvious in living or fresh specimens. A faint, white zigzag line is more or less noticeable across the center of the back (depending on individual).
Spiders:   There are several fall invader spider species and none are harmful to people.  Grass spiders and wolf spiders are the most common species. 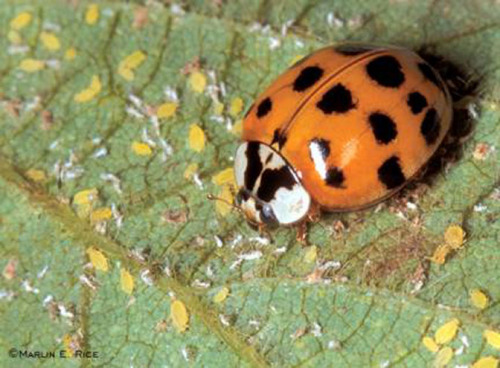 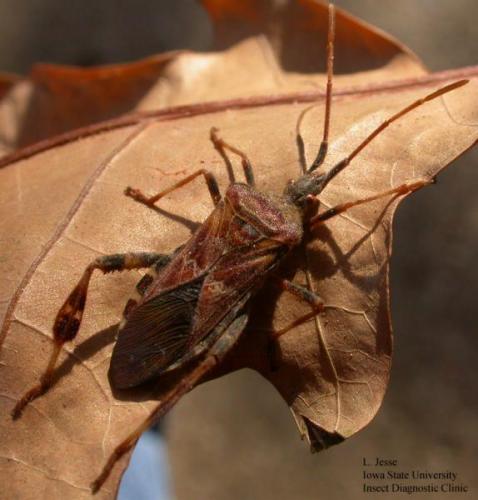 The pine seed bug is an inch long; much longer and more narrow than the invasive brown marmorated stink bug. 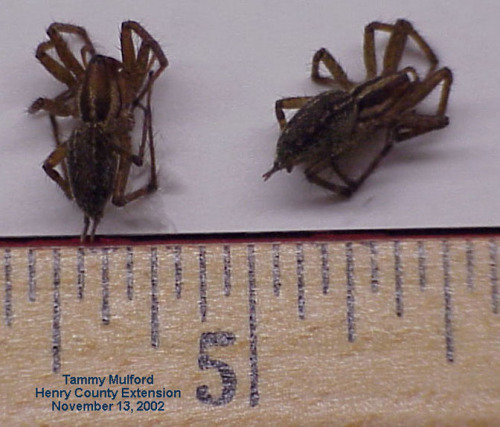 Grass spiders make horizontal, funnel-like webs on lawn and shrubs; they may wander indoors by accident. 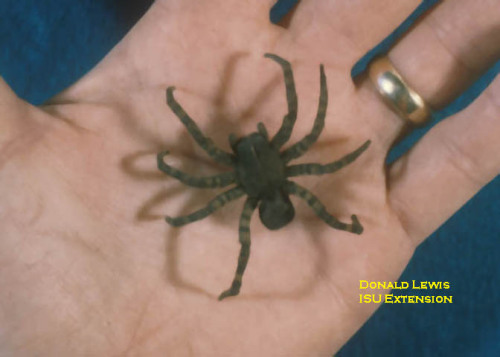 Wolf spiders are large, brown, slightly hairy and much scarier to most people than need be.

Links to this article are strongly encouraged, and this article may be republished without further permission if published as written and if credit is given to the author, Horticulture and Home Pest News, and Iowa State University Extension and Outreach. If this article is to be used in any other manner, permission from the author is required. This article was originally published on September 25, 2015. The information contained within may not be the most current and accurate depending on when it is accessed.