The BugGuide website uses the common name “sand chafer” which matches very well the locations where we must commonly see this beetle in fields, gardens and lawns.  However, the common name “false Japanese beetle” has been used in Iowa for at least the past 50 years!  The False Japanese Beetle is moderately common in the state but varies greatly from year to year.

“False” in insect common names usually means "not the real thing." I suppose calling them "Japanese beetle imitators" or "Japanese beetle look-alikes"would be unwieldy. And somehow "fake" isn't quite right either. There should be a better way to say, "similar to."

At least 6 other insects have the official common name beginning with the word "false." The best known in Iowa is the false chinch bug. As far as I know we don’t have the false potato beetle.

Read more about the false Japanese beetle on BugGuide.

An article about FJB was published in the Horticulture and Home Pest Newsletter in 1999.   Note since 1999 the true Japanese beetle has expanded its range in Iowa to 63 counties (not the 5 listed in the chart).

True Japanese beetles, Papillio japonica, have been reported in most of Iowa.  See the second photo below. 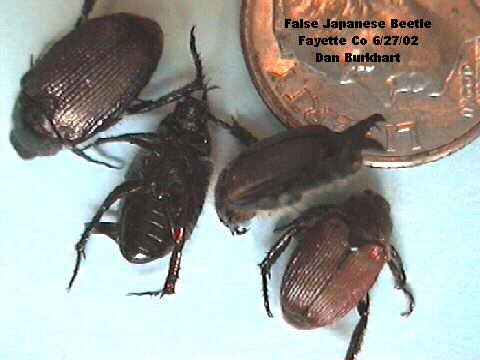 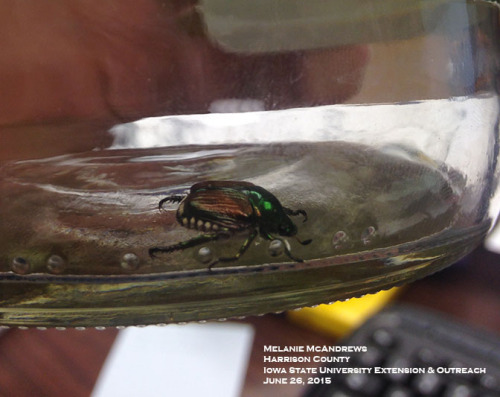 The "real" Japanese beetle has coppery-brown wing covers and tufts of white hair at the lateral edges of the abdomen.

Links to this article are strongly encouraged, and this article may be republished without further permission if published as written and if credit is given to the author, Horticulture and Home Pest News, and Iowa State University Extension and Outreach. If this article is to be used in any other manner, permission from the author is required. This article was originally published on June 26, 2015. The information contained within may not be the most current and accurate depending on when it is accessed.