Inquiries to the ISU Plant & Insect Diagnostic Clinic and to Iowa DNR/ Forestry Bureau District Foresters indicate this was another year for the widespread and common deformation of the leaves white oak called oak tatters.

Oak tatters is described as "leaves with little to no leaf tissue between the veins and leaves looking lacy or tattered.  See photos below.  The initial reaction is often that the leaves look like they have been eaten by insects or that the leaves have been infected with anthracose (a fungal disease that causes irregular tan spots on leaves).   Callers also mention that impacted trees look very thin and void of leaves from a distance, while other species around them look green and healthy.  The leaf condition called “tatters” has been consistently reported in Iowa since the mid 1990’s.

In general, tatters has been reported on white oak, but in recent years it has also been observed on red oak, bur oak, black oak, pin oak, and the non-oak species hackberry.  This symptom shows up in the spring time as leaves begin to emerge.  In most cases, the new leaves emerge in the spring looking normal and when they are one-fourth to 3 inches in length the leaf edges and tissue between the veins becomes brownish or purplish in color, and within 1 to 2 weeks the damaged tissue falls off and tatters symptoms appear.  This symptom has been reported on trees of all ages, sizes, and locations (urban and woodland settings) though tatter symptoms are more commonly reported in rural areas.  In some cases the same tree will show the symptom in repeated years and others will have the symptom one year and not the next.  Generally, within 3 to 6 weeks heavily impacted trees will produce a new flush of leaves to replace damaged leaves.  The new flush of leaves usually does not show the tattered symptom.  (See photo below)

In the long term, trees that are impacted in repeated years by this problem could become more susceptible to stress-related problems such as borers or root rots.  There is no direct research evidence at this point that the tatters condition has caused tree death, but there is concern that it may be causing stress to impacted trees.

Two common theories related to the potential cause of the tatters condition on oaks and hackberry are herbicide drift and cold injury, or a combination of both.  There have been no specific studies looking at cold injury and leaf tatters on specific species.   A 2004 study at the University of Illinois indicated a possible link between tatters and the movement of specific agricultural herbicides when leaves are unfolding in the spring.

In woodland situations very little can be done to help trees impacted by tatters, but in urban situations providing a healthy growing environment and avoiding other stresses (i.e. construction damage- cut/fill/compaction) can potentially help trees stressed by tatters. 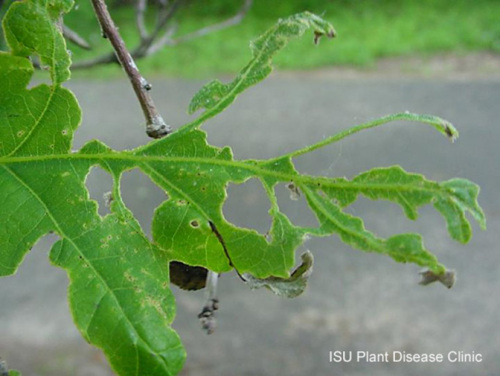 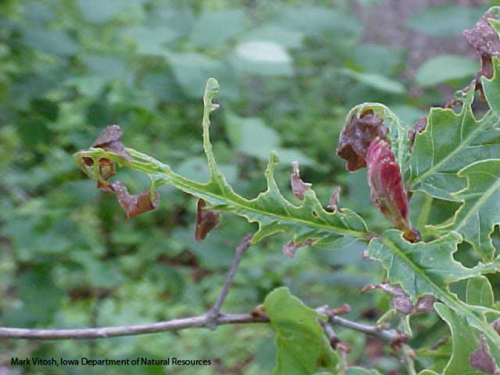 Early symptoms of tatters may be mistaken for fungal disease. 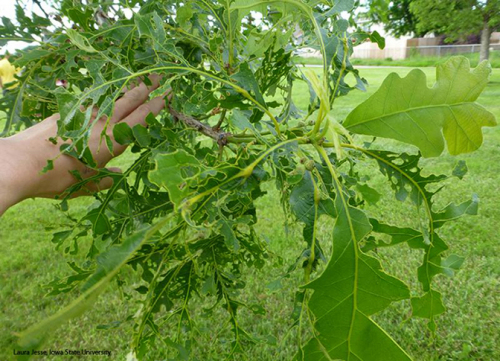 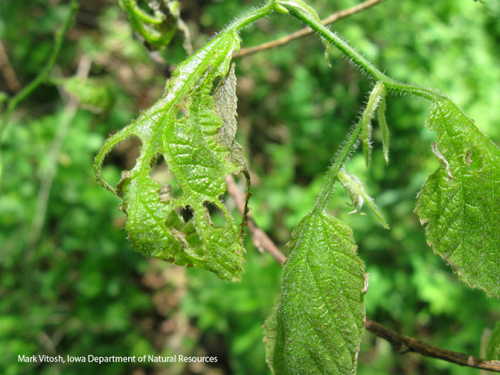 Links to this article are strongly encouraged, and this article may be republished without further permission if published as written and if credit is given to the author, Horticulture and Home Pest News, and Iowa State University Extension and Outreach. If this article is to be used in any other manner, permission from the author is required. This article was originally published on June 12, 2015. The information contained within may not be the most current and accurate depending on when it is accessed.