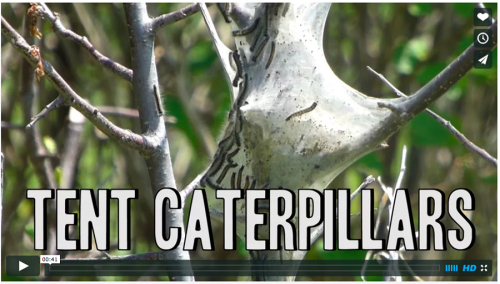 Eastern tent caterpillars (Malacosoma americanum) have been numerous and obvious the past few weeks in Iowa.  I have noted large numbers of them on ornamental shrubs planted along the interstate highways.
Eastern tent caterpillars make ‘tents’ of silk in the crooks of branches of the tree or shrub they are feeding on.  The caterpillars use the tent for protection from weather, predators and parasites and move out of the tent to feed on the leaves during the day.  Tents start out very small but enlarge as the caterpillars feed and grow and add to the tents, making them more obvious in the landscape.
Caterpillars feed on buds and foliage a variety of trees and shrubs but prefer apple, crabapple, wild plum, cherry and similar trees.
Life cycle
There is only one generation of eastern tent caterpillars each year.  The female moth lays egg masses on the branches of host plants during the summer. Eggs do not hatch until the following spring, usually in April, but this depends on temperature.  The caterpillars feed on the host plant foliage and construct the silk tent.  Caterpillars feed for 4-6 weeks and when fully grown they crawl to the ground where they search for a good location to make their cocoons and pupate.  The large numbers of wandering caterpillars near homes can be cause concern, but they are done feeding and no management is necessary at this point. Adult moths emerge several weeks later; mate and the female moths lay the egg masses on branches that will hatch the following year.
Management
Damage can be reduced by removing and destroying tents and caterpillars as soon as they are noticed. Tent removal should be done in early morning or late evening or on cool rainy days when the caterpillars are inside the tents. The caterpillars and the silk webbing are harmless to people; no harm comes from taking down the tent with your bare hands, although some people would rather do this operation with a pole or gloved hands.  Insecticides labeled for caterpillar control on ornamentals may also be used when the caterpillars are small.  If there are no caterpillars present the tent is old and no treatment is necessary.
Caterpillars often confused with the Eastern tent caterpillar
The eastern tent caterpillar is often confused with several other caterpillar species; the forest tent caterpillar, fall webworm, and the bagworm.
The forest tent caterpillar (Malacosoma disstria) is a closely related, but different species that occasionally has regional outbreaks with large populations heavily defoliating forested areas.  These outbreaks are more common in northeastern Iowa.  Forest tent caterpillars do not make tents.
Fall webworms (Hyphantria cunea) are not closely related, but the caterpillars do feed as a group and build a silken ‘tent’ or web in trees.  Fall webworms make their web around the leaves as they feed so they are usually at the ends of branches and are larger.  Fall webworms are also active much later in the year and are noticed August-September.
The bagworm moth caterpillar (Thyridopteryx ephemeraeformis) lives its entire life inside a tough protective, case made of silk and camouflaging bits of foliage. Each caterpillar makes its own bag that it carries around as it feeds with the head and legs sticking out the open, top end of the bag.  As the caterpillar eats and grows the bag is enlarged until by the end of the summer, what started as tiny pods only one-quarter inch long will have grown to almost 2 inches in length. 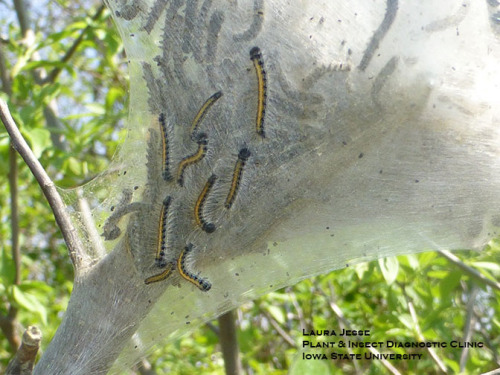 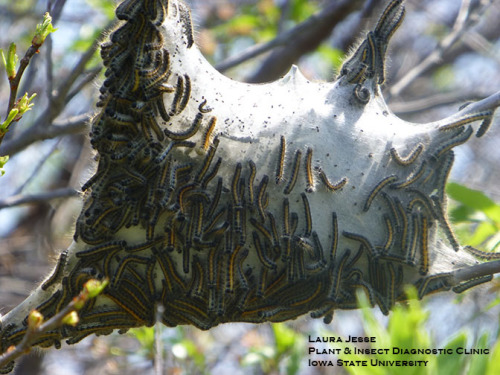 Eastern tent caterpillars feed for 4 to 6 weeks and grow to about 2.25 inches in length. 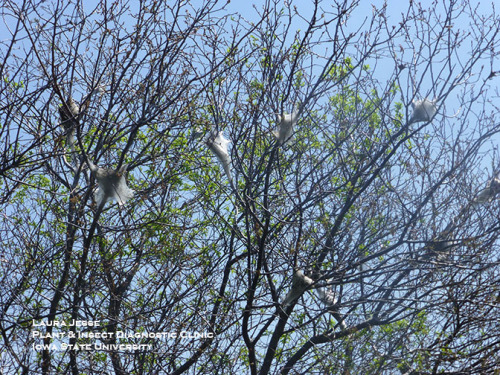 Eastern tent caterpillars are common on apple, crabapple and Prunus sp. of trees. 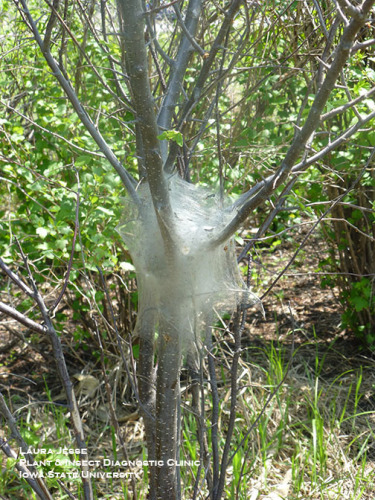 Eastern tent caterpillar tents are built at the forks of host tree branches.

Links to this article are strongly encouraged, and this article may be republished without further permission if published as written and if credit is given to the author, Horticulture and Home Pest News, and Iowa State University Extension and Outreach. If this article is to be used in any other manner, permission from the author is required. This article was originally published on May 8, 2015. The information contained within may not be the most current and accurate depending on when it is accessed.