Did you know that Iowa is one of only four states that do not have an official state insect or butterfly?  Perhaps you already know that Iowa has a state tree (oak), flower (wild rose), bird (eastern goldfinch) and rock (geode), which was the last to be designated 48 years ago.   With just these four state symbols Iowa has the lowest number of official state symbols of any of the 50 states.

The regal fritillary has only one generation a year (univoltine).  In the fall the females lay their eggs in tall grass prairies.  Unfortunately for the females, the caterpillar food plants, bird’s foot violet and prairie violet, die back to the ground in late summer.  The female butterflies have to dive bomb and crawl their way through tall grasses to reach the ground.  There, using chemical volatiles from where the hos plant died, they lay their eggs as close as possible to where the violets will emerge the following spring.

In early spring, the caterpillar eats the violet leaves and goes through six instars (stages in between molts).  Most butterfly caterpillars go through only five instars before pupating.  Adults emerge in early summer; males and females fly around for several weeks and eventually mate.

After mating, the females tend to go into a summer diapause which helps them survive often the hottest and driest part of the summer, until fall when they will begin laying their eggs and the process starts all over again.

The Iowa’s State Butterfly joint resolution can be found on the Iowa Legislature website.

If you are interested in supporting the regal fritillary as the official state butterfly of Iowa, please contact your Iowa Senator and House Representative.

As you are planning your gardens for this spring, consider planting a few extra plants to help support our native insects.  There is fun new program in Iowa you can participate in with the addition of nectar and host plants to your garden.  "Plant.Grow.Fly" is a state-wide effort to increase the amount of habitat suitable for our native butterflies, insects and pollinators, more information on PGF and how to participate can be found at their website https://www.blankparkzoo.com/conservation/plantgrowfly/. 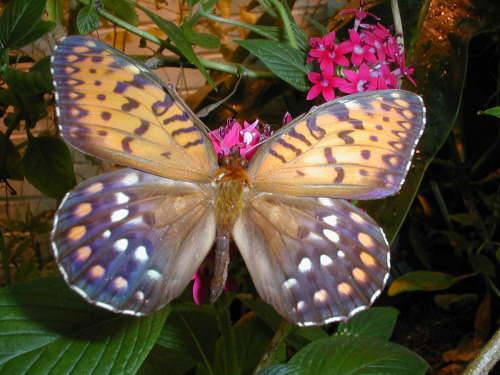 Links to this article are strongly encouraged, and this article may be republished without further permission if published as written and if credit is given to the author, Horticulture and Home Pest News, and Iowa State University Extension and Outreach. If this article is to be used in any other manner, permission from the author is required. This article was originally published on February 13, 2015. The information contained within may not be the most current and accurate depending on when it is accessed.