All About the Pawpaw; A Dessert Fruit for Iowa

By Patrick O’Malley, Commercial Horticulture Field Specialist
Description & Background
The pawpaw (Asimina triloba) is the largest edible tree fruit native to the United States and grows wild in 25 states, including Iowa.  In Iowa they are found in the wild in the southwest and southeast part of the state, usually as an understory tree.  On the east side of Iowa they are found as far north as Jackson and Dubuque County.   In full sun pawpaw trees grow to about 15’ high and 8’ in width.  In shaded areas they may be taller, but narrower in spread.  Pawpaws are relatively free of pests and deer do not eat them, although they can cause rubbing damage.
There is a debate on whether the tree is actually native to Iowa or was introduced by Native Americans and/or railroad workers.  Perhaps it is more than just a coincidence that many of the populations are found within 100 yards of an existing or former railroad right away.  One theory is that railroad workers brought fruit up from Missouri and southern Illinois.  In the process of eating the fruit they spit out the seeds and started new populations.
Pawpaw Fruit
This delightful dessert fruit tastes somewhat like a very sweet banana.  The texture is like a cross between a melon and banana. The creamy flesh is generally light yellow to orange in color.  Inside the fruit are two rows of brownish black seeds about the size of two pennies stacked together.  The fruit can be eaten fresh or the pulp can be used for a multitude of uses including ice cream, bread, and wine.  The fruit range from a few ounces up to 20 ounces in size.  In Iowa the fruit generally ripen in September, although it can range from late August to early October.
Iowa Papaw Trial
A replicated trial of 28 accessions was initiated in 1999 in Louisa County near Columbus Junction and a smaller trial was started in 2000 in Nashua.  Trial results have indicated that pawpaw fruit can be grown in the upper Midwest and certain accessions were shown to have better potential for production.  Some impressive performers in the trial include “Pennsylvania Golden,” an existing cultivar that ripens early and had the largest number of fruit, but each fruit was relatively small (about 6 ounces).  A recently released cultivar “Shenandoah”, features midseason ripening, large fruit (many over 10 ounces), and low seed count. A later ripening cultivar recently released as “Susquehanna” bore large fruit (above 10 ounces) and had low seed count.  It appears at least 10 years of growth are needed for trees to achieve full production of fruit.  Yields are still being determined but it looks like each tree could produce in excess of 10 pounds of fruit. In general, it appears growth rates and potential yield north of HWY 30 will be less than the more optimum conditions south of HWY 30.
Postharvest
Pawpaw that is unrefrigerated has a shelf life of just a few days, and refrigerated pawpaw will last about two weeks. The biggest hurdle for commercialization is devising a way to handle the processing to produce pulp.  Currently the main way to separate the pulp from the seeds and skin is by hand which is uneconomical on a large commercial scale.  There is ongoing research on ways to separate skin and seed from pulp by mechanical methods.
Resources

Reprinted from the IowaProduce.Org e-newsletter, November, 2014 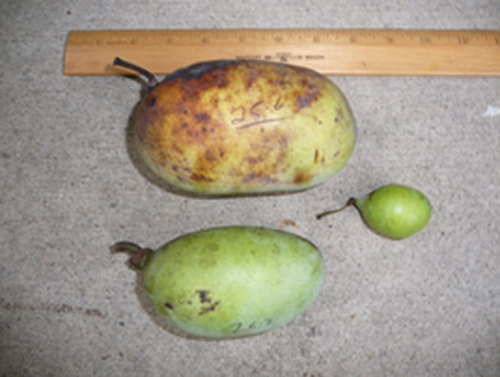 Pawpaw fruit show great variation in shape and size. Fruit may weigh from 1 to 20 ounces.

Links to this article are strongly encouraged, and this article may be republished without further permission if published as written and if credit is given to the author, Horticulture and Home Pest News, and Iowa State University Extension and Outreach. If this article is to be used in any other manner, permission from the author is required. This article was originally published on November 14, 2014. The information contained within may not be the most current and accurate depending on when it is accessed.