Accidental Invader Season Is Upon Us

It's that time of year again.  Insects, spiders and millipedes are moving through the county and a few of them wander into the house by accident.

Millipedes, mentioned in the September 26, 2014 issue of HHPN, continue to move and perturb.  Along with them are a few reports of boxelder bugs and multicolored Asian lady beetles, but fortunately, and so far, many fewer than in previous "outbreak" years.
Less usual accidental invaders to watch for, identify and discard include the mole cricket (photo below) and the pine seed bug (second photo).  Mole crickets are recognized by a unique combination of parts that look like they came from two different animals:  The body looks like that of a cricket and the toothed, front, spade-like legs look like they came from a mole.  Mole crickets are a curiosity in Iowa.   They are harmless outdoors and in.  When found indoors as accidental invaders pick ‘em up and throw them back outside.
Pine seed bugs, officially named the western conifer seed bug, feed on sap from pine seeds (inside the developing pine cones) as the name implies.
The pine seed bug is moderately common in Iowa and lives on pine trees all summer and then migrates in the fall (much like boxelder bugs).  They are harmless but annoying.  The white zig-zag line on the back and the expanded plates of the hind tibia are distinctive.  That plus the one inch-long, elongated shape help distinguish the pine seed bug from the invasive brown marmorated stink bugs.
Speaking of brown marmorated stink bugs, we have had reports of numerous bugs on the side of the house in counties where they had previously been reported.  So far this year no new county records have been reported.  Keep us in mind and let us know when you find some in areas not previously reported. 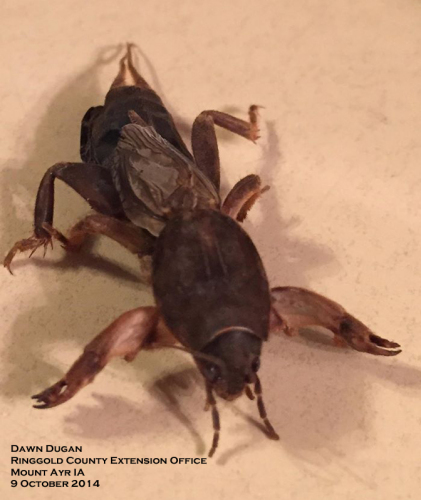 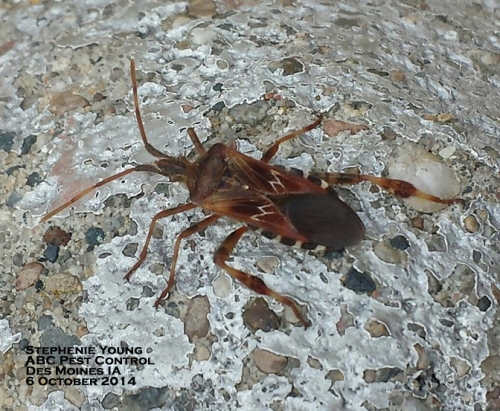 Pine seed bugs live on pine trees all summer but may wander indoors during the fall.

Links to this article are strongly encouraged, and this article may be republished without further permission if published as written and if credit is given to the author, Horticulture and Home Pest News, and Iowa State University Extension and Outreach. If this article is to be used in any other manner, permission from the author is required. This article was originally published on October 10, 2014. The information contained within may not be the most current and accurate depending on when it is accessed.