Mushroom or Plant? The Case of the Indian Pipes

By Ashley West, Plant & Insect Diagnostic Clinic
While on a mushroom foray with students, we stumbled upon an unusual sight…a completely white flower. The stem, flower head, and petals were completely white with small black flecks on the petals and sepals. The flower head was pointed downward. Like any good biologist we got down on our hands and knees, photographed the flower, and dug around the base of this abnormal flower. The first question I was asked was "Is it a plant or a mushroom?" Since I had never seen something like this before, the situation became an excellent teaching moment.
Turns out, our mysterious flower is indeed an angiosperm (flowering plant) commonly known as ghost plant or Indian pipe (Monotropa uniflora). Indian pipes are perennial wildflowers found throughout the United States.  There are at least 3,000 known species of non-photosynthetic angiosperms. The leaves are small and scale-like. The plant is approximately 10-30 centimeters (4-12 inches) tall.
How does this plant obtain its nutrients if it does not contain chlorophyll? Indian pipes are mycoheterotrophic meaning they get their nutrients from an outside source; in this case fungus. The relationship between the Indian pipes and the fungi becomes more complicated because the fungus is a mycorrihizal. Mycorrihizal fungi are fungi that live symbiotically with trees and their roots. The Indian pipes take advantage of the symbiosis between mycorrihizal fungi and the tree by parasitizing the fungus. These relationships appear to be very host and species specific. Monotropa uniflora forms a relationship with Russula and Lactarius species.
Generally, species of Monotropa are found in mature forests with moist thick leaf cover. These plants spend most of their lives underground and only come above ground to flower and disperse. These plants flower early summer to early autumn.
For more information on Indian pipes, please see websites at the USDA Forest Service and the University of Wisconsin-La Crosse. 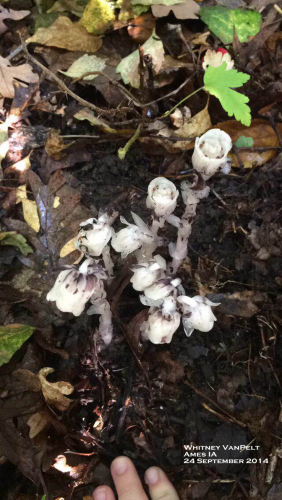 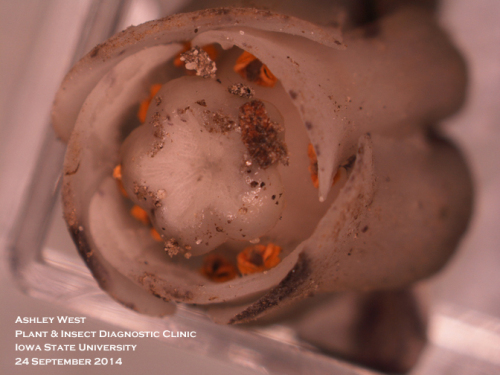 Close up of the Indian pipe flower head.

Links to this article are strongly encouraged, and this article may be republished without further permission if published as written and if credit is given to the author, Horticulture and Home Pest News, and Iowa State University Extension and Outreach. If this article is to be used in any other manner, permission from the author is required. This article was originally published on October 10, 2014. The information contained within may not be the most current and accurate depending on when it is accessed.