Rust is a fungal disease caused by several species of Puccinia.  All turfgrass species are susceptible to rust.  However, it is most commonly seen on perennial ryegrass and Kentucky bluegrass.

From a distance, rust infected turf has a yellow-brown color.  Close examination of rust-infected grass blades reveals numerous yellow-orange pustules.  Rust can be easily diagnosed by walking across the lawn.  As one walks across the lawn, bright orange spores of the rust fungus rub off onto one’s shoes.

Rust is annoying, but it rarely kills established lawns.  The damage is mainly cosmetic.  New spring-seeded lawns are most likely to be seriously damaged by rust.

Rust usually fades away (by itself) when the grass begins growing more rapidly with favorable weather conditions.  Gardeners can promote turfgrass vigor by fertilizing in September and watering deeply once a week during dry periods.  Water in the morning.  Morning irrigation allows the grass blades to dry quickly, thereby discouraging rust infections.  Mow the lawn frequently.  In most situations, fungicide sprays are not necessary.

Additional information on turfgrass rust can be found at the iaTURF blog, www.iaturf.blogspot.com 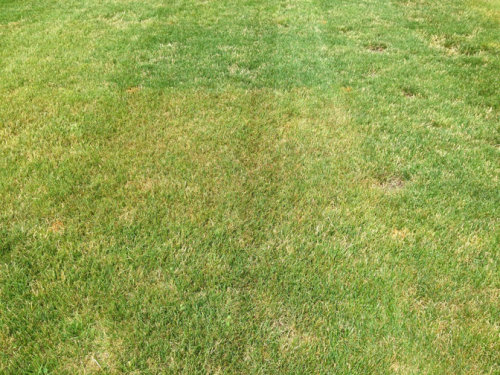 Turfgrass infected with rust has a yellow-brown color from a distance.  Photo by Nick Christians. 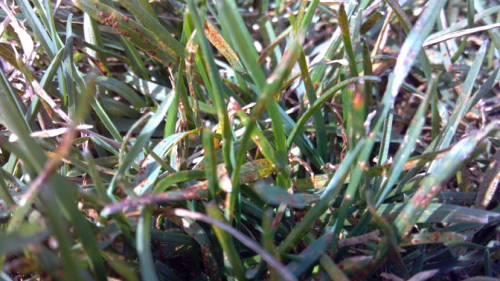 Links to this article are strongly encouraged, and this article may be republished without further permission if published as written and if credit is given to the author, Horticulture and Home Pest News, and Iowa State University Extension and Outreach. If this article is to be used in any other manner, permission from the author is required. This article was originally published on August 8, 2014. The information contained within may not be the most current and accurate depending on when it is accessed.