Wood chips and shredded bark are commonly applied to landscape areas to control weeds and conserve soil moisture.  Wood chips and shredded bark are organic matter.  The decaying organic matter provides an ideal environment for some strange-looking fungi or fungal-like organisms when weather conditions are favorable.  Fungi that occasionally grow in landscape mulches in Iowa include stinkhorns, slime molds, and bird’s nest fungi.

Stinkhorns are aptly named as they are horn-shaped and foul-smelling.  They usually appear in cool, wet periods in late summer and early fall.

Several species of stinkhorn are found in Iowa.  Stinkhorns start off as an egg-like, golf ball-sized structure in the soil.  As the fungus develops, a stalk grows upward and is topped with a slimy cap coated with a mass of olive green to brown spores.  The putrid smell of the stinkhorn cap attracts flies and other insects.  The flies and other insects crawl on the stinkhorn, get covered with slime and spores, then fly away to other areas, disseminating the spores.  Stinkhorns range from four to eight inches in height.

Stinkhorns are not harmful to plants.  Eventually, the stinkhorns wither away and disappear.  Individuals can scoop up and discard the fungi if their appearance or smell is bothersome.

Slime mold is a brightly colored (usually yellow or orange) foam-like growth that occasionally appears in mulched areas in summer.  (It is sometimes referred to as dog vomit slime mold because of its bile-looking appearance).  Slime molds are primitive fungal-like organisms.  Slime molds feed on bacteria and other organisms in the mulch.  They do not harm plants.

Bird’s nest fungi resemble small cups or miniature bird’s nests.  The tiny fungi are only one-fourth inch in diameter.  The nests (fungi) are commonly brown, gray, or white and contain brown or white “eggs.”  The “eggs” are spore-containing structures called periodioles.  The eggs are splashed out of the nest by falling raindrops and adhere to nearby objects.  The periodioles eventually dry, split open, and release their spores. 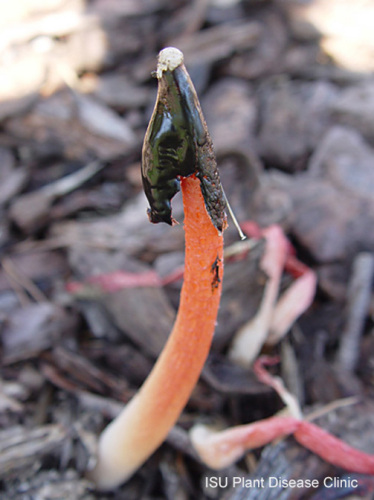 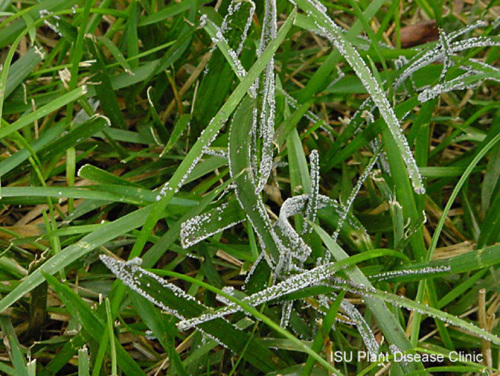 Slime mold fungus on turfgrass. Slime molds will grow across mulch and other plants, too! 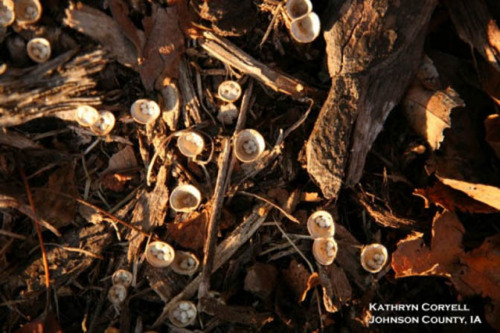 Links to this article are strongly encouraged, and this article may be republished without further permission if published as written and if credit is given to the author, Horticulture and Home Pest News, and Iowa State University Extension and Outreach. If this article is to be used in any other manner, permission from the author is required. This article was originally published on July 11, 2014. The information contained within may not be the most current and accurate depending on when it is accessed.