Grasshoppers in the Home Garden

Grasshoppers are an occasional pest in Iowa farms and gardens.  The number of grasshoppers varies greatly from year to year and from place to place.  This appears to be one of the years when at least some growers and gardeners are going to see more than the usual number.

The grasshoppers commonly found in Iowa spend the winter as eggs in the soil deposited in turfgrass or other sod areas by the female during the previous summer.  Though some insect numbers were impacted by last summer's drought and last winter's deep and long-lasting frost that doesn't appear to be the case with grasshoppers in some areas.

For an example of drought + freeze effects on an insect, read about Japanese beetle white grub population declines in northern Illinois see the University of Illinois Home, yard and Garden Pest newsletter from June 16, 2014.

Grasshopper eggs typically start to hatch in mid-June to early July.  The tiny grasshopper nymphs (immatures – see photo below) feed on tender grass and succulent plants in the area where they hatched.  As they grow and develop they spread to adjacent areas (into tilled gardens and fields, for example) and feed on an increasingly-diverse variety of plants.  Grasshopper nymphs live for 40 to 60 days after which the adults appear and continue feeding until they are killed by cold weather.

Damage caused by grasshoppers appears as irregular holes at the edge of plant leaves.  As grasshoppers grow they may eat larger portions of infested leaves, and may eventually destroy every green plant in the area.

Several natural controls reduce grasshopper populations in most years.  Exceptional populations of grasshoppers occur when weather, predators, parasites and pathogens combine in a way that allows more-than-usual numbers of eggs and nymphs to survive.

Applied controls include mechanical removal (which is not widely practiced or practical) and insecticide sprays.  Applied natural controls such as the microsporidian disease (Nosema locustae) are widely touted on the Internet but have not been shown to be effective in gardens and small fields.  Nosema locustae works slowly against small nymphs and may provide a long-term suppression when used over a large area.  It has no immediate effect and does not control large nymphs or adults.

The most effective use of insecticides is to treat the hatching areas (e.g., turfgrass, waterways, roadside ditches, fencerows) when grasshoppers are still small.  Treat a wide border around the garden or vegetable field to prevent migration into the crop area.  The last line of defense is to spray infested plants which can be a slow and repetitive process.  Damage will continue until grasshoppers on the plants have consumed a sufficient quantity of the insecticide residue and migration of grasshoppers from the surrounding area means treatment will have to be repeated every 3 to 5 days.  Keep in mind insecticide sprays are more effective than dusts and small grasshoppers are easier to kill than adutls.

Insecticides for grasshopper control include pyrethroids such as bifenthrin, permethrin, cypermethrin, cyfluthrin and lambda-cyhalothrin, and Sevin, or malathion.  Check the label to make sure the crop you intend to spray is listed on the label directions.  Apply at only the rate listed on the label and repeat no more often than specified.  Check harvest waiting restrictions for the waiting period between application and harvest. 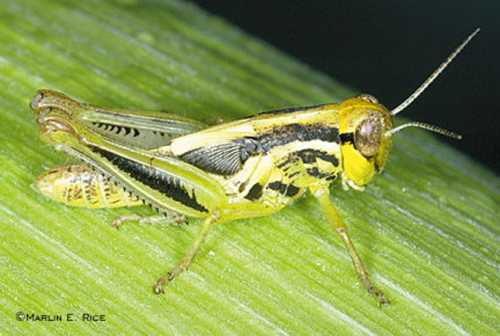 Grasshopper nymphs look like adults only smaller and without wings. Nymphs can be as small as one-quarter inch!

Links to this article are strongly encouraged, and this article may be republished without further permission if published as written and if credit is given to the author, Horticulture and Home Pest News, and Iowa State University Extension and Outreach. If this article is to be used in any other manner, permission from the author is required. This article was originally published on July 11, 2014. The information contained within may not be the most current and accurate depending on when it is accessed.