It's been a great two weeks watching and listening to the periodical cicadas in central and southeast Iowa.  Most callers and email-writers are enjoying the spectacle these unique insects provide, though in the last few days some callers are expressing annoyance and frustration at the constant singing of the males and the occasional cicada landing on them when they go outside.  Here are answers to the recent questions concerning periodical cicadas.

When will they end?

The periodical cicada adult emergence lasts for only 4 to 6 weeks.  Since the first reports were the end of May, there should be a noticeable decline in numbers (and noise) starting in early July.  By the middle of July the noisy adults will become a fading memory and it will be 2031 before we have to "put up with" this again.  And one more time:  Adult cicadas are harmless.  They do not bite and they cannot sting.  They do not feed on field crops, gardens, landscapes or houses.

Why are some cicadas white?

White cicadas are called teneral adults, the entomologist's term for "newly-emerged-and-not-yet-hardened."  They are creamy-white when they shed the exoskeleton (outer shell).  While soft and white, they enlarge to the fully-grown adult size and expand the wings.  See photos below.

Why is the life cycle of periodical cicadas so long?

For a full report on the 13 and 17 year life cycles of periodical cicadas, see "Deciphering the Strange Mathematics of Cicadas" at the Scientific American blog for May 23, 2013.

One general explanation is that the extra-long life cycle may be an adaptation to avoiding to cold summers as glaciers were advancing and retreating during the past one million years.  The other hypothesized reason is that long life cycles of prime numbers make it impossible (or at least very difficult) for a predator to specialize on eating cicadas.  The predator life cycle would have to synchronize with the cicada life cycle to be a cicada-eating specialist.

Why are there so many of them all at once?

Again, we can only speculate, but it appears that having all cicadas emerge at the same time in an area overwhelms the predators.  Animals feasting on the smorgasbord of tasty and defenseless will never be able to eat them all; no matter how hard they try.  There will be plenty of survivors to mate, lay eggs and perpetuate the species.

Only the males sing.  True or False?

Sort of true, but not entirely.  The singing you hear from a distance and the incessant droning in the woodlands is the all-male chorus hoping to attract the attention of females.  The male calling and courting songs are the obvious ones.  Males also make a less obvious rough buzzing "alarm sound" in the presence of danger.  Females are not entirely silent.  Females create a "wing flick" rustling sound when responding to a male.  Males both watch and listen to the wing flick with great interest. 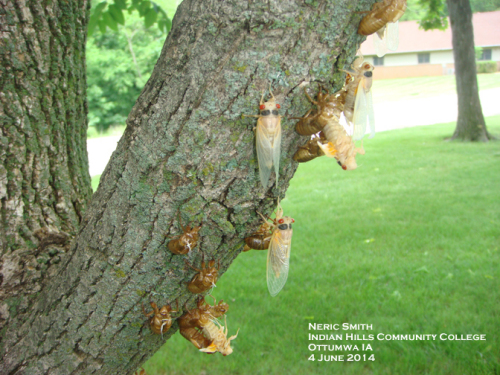 Emerging cicadas (lower center and near the top) and newly emerged (teneral) adults. 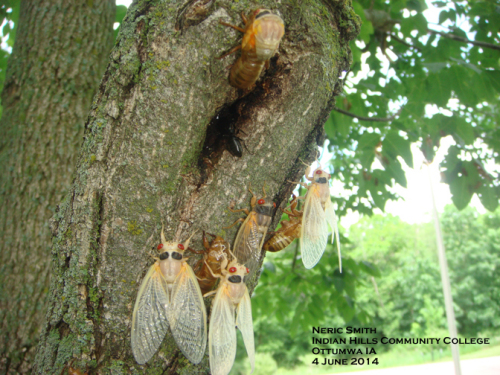 Close-up of teneral adult periodical cicadas before they harden and darken. 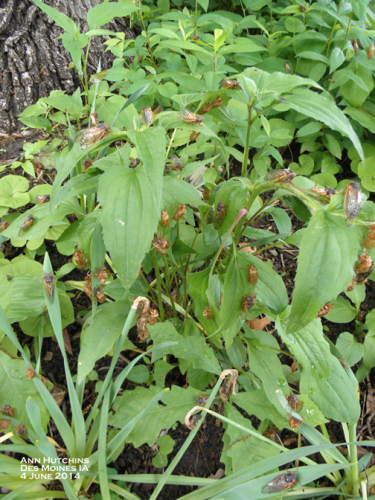 Periodical cicada nymphs climb up on pretty much anything to molt to the adult stage, leaving the empty shell behind.

Links to this article are strongly encouraged, and this article may be republished without further permission if published as written and if credit is given to the author, Horticulture and Home Pest News, and Iowa State University Extension and Outreach. If this article is to be used in any other manner, permission from the author is required. This article was originally published on June 13, 2014. The information contained within may not be the most current and accurate depending on when it is accessed.