Periodical Cicadas Return to Iowa in 2014

It’s been a long wait but it is almost over!  This is the year that Brood III of the periodical cicadas (a.k.a. 17-year “locusts”) will emerge from the ground and appear as adults in a significant portion of the state of Iowa.  The periodical cicadas we will see and hear this summer are the offspring of the adults that we saw way back in 1997.  For 17 years, the cicada nymphs have waited underground.  This is the summer we (and they!) have waited for!

The long-term historical record in Iowa going back 56 years indicates the Brood III periodical cicadas have been seen in portions of 46 central, south-central and south-east counties (see the highlighted area of the accompanying map).  Cicadas do not appear everywhere within those counties. The most likely places for these unusual insects are in large, long-standing, upland native woodlands.  Cicadas may have disappeared from the fringe of the distribution because of loss of woodlands, or the population became too small to be sustainable.

Although this is our largest brood of periodical cicadas, it is not the only brood in the state. Other recent periodical cicada emergences occurred in northeastern Iowa (2007) and southeastern Iowa (2011). The current emergence (called Brood III) will occur in Iowa, Missouri and Illinois. Other broods occur in other years in other parts of the eastern United States.  See the distribution maps at www.magicicada.org.

Special features. Four characteristics of the periodical cicadas make them exceptional even by the standards of the incredible and fascinating world of insect species. The first is the 13 or 17 year life cycle. The life span of 17 years puts the periodical cicadas among the longest-lived insects in the world. All but a few weeks of those 17 years are spent as a nymph, 18 to 24 inches deep in the soil of wooded and forested areas, feeding on sap from tree roots.

The second phenomenon is how all the cicadas in an area emerge at once in highly synchronized fashion. The nymphs develop slowly and at different rates, but at the end of the 17 years, they have all developed fully and begin digging their way to the soil surface.

The nymphs surface during late May and June and climb up tree trunks, posts and poles. The outer shell of the nymph splits along the middle of the back, and the winged adults laboriously emerge over the course of about one hour.

Each adult may live for 5 or 6 weeks. During that time the males and females mate and the females lay the eggs that are the start of the next generation. Eggs are laid into the small twigs of trees and shrubs. This causes moderate twig dieback and some disfigurement ("flagging") of forest and woodland trees, but no longterm consequences. The eggs hatch after 6 to 7 weeks and the newly hatched nymphs fall to the ground, burrow until they find a suitable tree root, and begin the feeding.

The third special feature of periodical cicadas is the incredible noise for which they are known. The males "sing" with a loud buzzing or drumming sound from about 10:00 AM to mid-afternoon. The incessant buzzing sound is produced by two shell-like drums located along the sides of the abdomen. Strong muscles vibrate the drum membranes several times per second. The resulting high-pitched, rapid clicks are resonated through air sacs to control sound volume and quality and the upward angles of the wings form a megaphone-like chamber that further controls the sound.  A recording of a periodical cicada chorus can be heard online at songofinsects.com.

And finally, periodical cicadas can occur in numbers that stagger the imagination and repulse the squeamish. Populations can reach up to a million and a half cicadas per acre. That can mean as many as 40,000 cicadas per tree.

Witnessing a massive emergence of periodical cicadas takes patience and planning but is worth the wait. This is our year! Don't miss this opportunity because your next big chance will be in the year 2031! 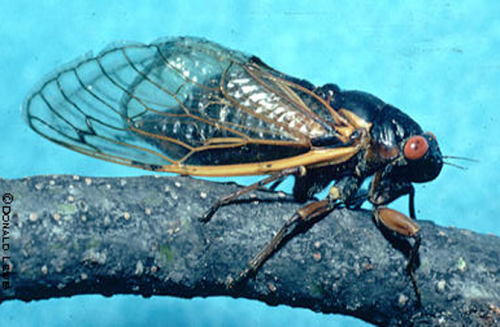 Periodical cicada. Photo taken by the author in 1980. This individual is a grandparent of cicadas that will emerge this year. 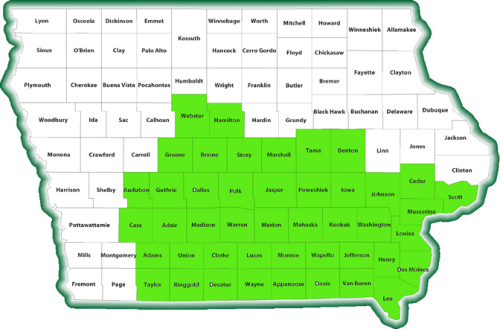 Potential distribution of Brood III Periodical Cicadas in Iowa, 2014. Look and listen for cicadas in native woodlands and river valleys.

Links to this article are strongly encouraged, and this article may be republished without further permission if published as written and if credit is given to the author, Horticulture and Home Pest News, and Iowa State University Extension and Outreach. If this article is to be used in any other manner, permission from the author is required. This article was originally published on April 11, 2014. The information contained within may not be the most current and accurate depending on when it is accessed.