This is the time of year for carpet beetles.  Although carpet beetles can feed on a variety of items in the home, they commonly are feeding on dead insects in wall voids and attics.  The beetles become active with warmer weather such as the 60-degree weather earlier this week.  You will also notice the surviving lady beetle, boxelder bugs, and other insects that overwintered in walls and attics wandering around in homes as the weather warms up.

Carpet beetles are scavengers that feed on a variety of animal products such as woolens, hides, feathers, hair, taxidermy specimens and dried meats.  Older woolen carpets, carpets with animal fiber pads and untreated oriental rugs are can also be infested.  Modern carpets of synthetic fiber or modern woolens that have been treated are not usually the source of carpet beetles.

A major part of carpet beetle prevention and control is thorough vacuum cleaning to prevent the accumulation of lint, hair, and other carpet beetle food materials.  Close attention should be given to radiators and registers, corners, cracks and other hard to reach places.  It is my experience that finding a single source is the exception rather than the rule.  More often beetles are found throughout the house without a clear point of origin.

Applications of residual insecticides may be helpful as a supplement to inspecting and cleaning, but will not be a quick fix.  Treatment should be lightly applied to those surfaces upon which the insects are likely to crawl, such as along the edges of carpeting, in closets, behind radiators, baseboards and moldings, and in corners, cracks, and so forth.  Clothing and bedding should not be sprayed with insecticides.

Moth balls are rarely effective in controlling carpet beetles (or clothes moths!).  Moth ball vapors are only effective at high concentrations in air tight bags or boxes.  And this from Mike Potter at University of Kentucky:  “Contrary to popular belief, cedar closets or chests are seldom effective by themselves because the seal is insufficient to maintain lethal or repellent concentrations of the volatile oil of cedar.” 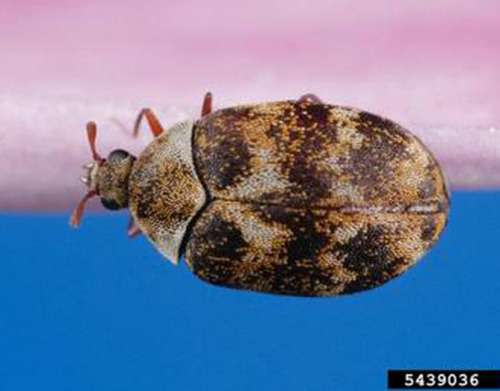 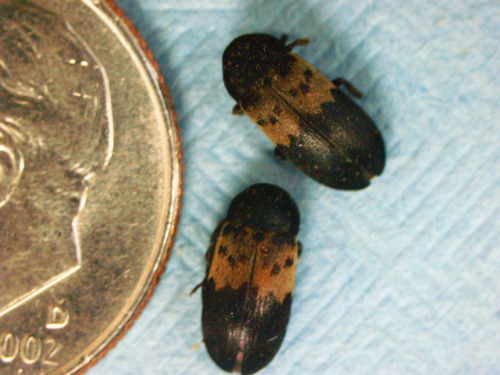 Links to this article are strongly encouraged, and this article may be republished without further permission if published as written and if credit is given to the author, Horticulture and Home Pest News, and Iowa State University Extension and Outreach. If this article is to be used in any other manner, permission from the author is required. This article was originally published on March 14, 2014. The information contained within may not be the most current and accurate depending on when it is accessed.