Houseplants grow very little during winter months and it can be challenging to keep them healthy. More often than not, indoor plants fail to thrive because of unfavorable temperature, humidity, lighting and watering.

One of the major issues for houseplants is root rot associated with overwatering.  Root rot is the most common indoor plant disease we see in the Clinic this time of the year.
Root rots are caused by several fungal and fungus-like organisms such as Pythium, Phytophthora, Rhizoctonia, and Fusarium. In general, these pathogens thrive in wet, poorly drained soils and potting mix, and they infect the root system of stressed or weakened plants. Symptoms of root rot begin with wilting of bottom leaves that may progress upward until total plant collapse. These symptoms can be commonly mistaken for lack of water, so it is very important to examine the root system and potting mix moisture level before adding more water. A healthy root tissue should be firm, white, and show numerous feeder roots. In contrast, rotted roots are mushy and have a brown or reddish color.
Root rot can be prevented by choosing a well-drained potting mix and avoiding excessive watering.  Also, water plants based on their specific needs rather than following a watering schedule. Stressed plants are easy targets for pathogens.  Root rot prevention relies on maintaining vigorous healthy plants that receive adequate but not-too-much water, good nutrition and avoidance of environmental extremes during the winter.
For more on indoor plant maintenance see the ISU Extension & Outreach news release from November 9, 2011. 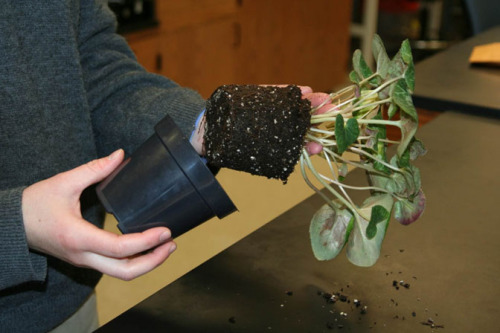 Overwatering can lead to rotted, dark brown or reddish roots.

Links to this article are strongly encouraged, and this article may be republished without further permission if published as written and if credit is given to the author, Horticulture and Home Pest News, and Iowa State University Extension and Outreach. If this article is to be used in any other manner, permission from the author is required. This article was originally published on February 14, 2014. The information contained within may not be the most current and accurate depending on when it is accessed.