The spotted wing drosophila (SWD), Drosophila suzukii, named for the spot in the outer edge of the male's wing, is present in Iowa, though the extent is not known.  Nearby states to the east and north are reporting major problems with SWD larvae in fruit and adult fruit flies in apple-cider-vinegar-baited traps.  We have received one sample in Iowa so far this summer, a new county record from Chickasaw County.  Other samples shouldn't be too far behind.  The map below shows the reported incidence to date.

SWD is especially troublesome for growers of blueberries, blackberries and raspberries.  The adult females saw through ripening, soft-skinned fruits to lay eggs.  Larvae inside quickly render the fruit unusable.  Monitoring to detect the adult flies is recommended, followed by insecticide applications to control the adult stage.  Sprays are problematic as the fruit are ripening.  Be careful to read and follow label directions concerning pre-harvest interval.  See the insecticide table below from Rick Weinzierl, University of Illinois.

*Estimates of residual activity are adapted from work done by Rufus Isaacs and reported on the Michigan State University web site listed above. 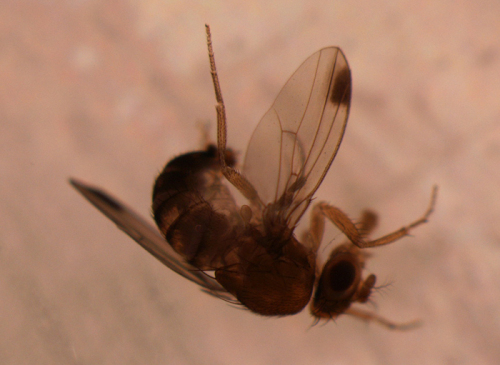 SWD males have a prominent spot in each wing.  Photo by Laura Jesse. 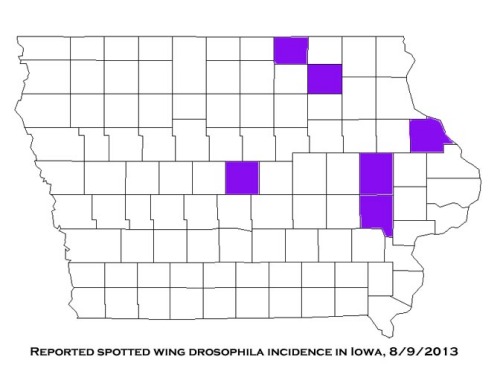 Links to this article are strongly encouraged, and this article may be republished without further permission if published as written and if credit is given to the author, Horticulture and Home Pest News, and Iowa State University Extension and Outreach. If this article is to be used in any other manner, permission from the author is required. This article was originally published on August 9, 2013. The information contained within may not be the most current and accurate depending on when it is accessed.