A recent review of reports of brown recluse spider specimens in Iowa confirms what we have said for some time:  brown recluse spiders are rare in Iowa but MIGHT be found in the southern portion of the state.  According to Rick Vetter, Department of Entomology, University of California, Riverside, all available evidence indicates Iowa remains on the northern edge of brown recluse range.  The spiders are absent in the northern portions of the state and though they might be found in isolated incidences in southern Iowa are still scarce, especially compared to southern Illinois, Missouri and other states to the south within the expected range of brown recluse.  See the map below.

The occasional discovery and confirmation of a brown recluse spider in central or southern Iowa does not indicate the spiders are common, widespread or found throughout the county.  Specimens could be an individual hitch-hiker intercepted upon arrival or from an isolated and localized infestation. 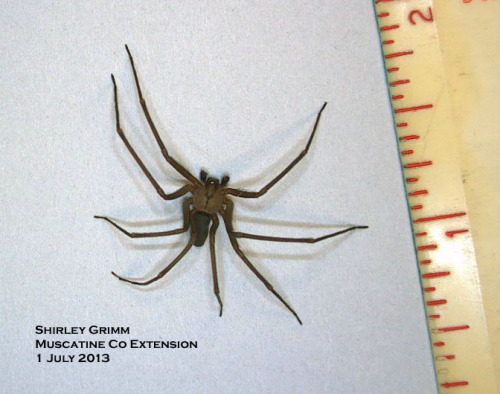 Links to this article are strongly encouraged, and this article may be republished without further permission if published as written and if credit is given to the author, Horticulture and Home Pest News, and Iowa State University Extension and Outreach. If this article is to be used in any other manner, permission from the author is required. This article was originally published on July 26, 2013. The information contained within may not be the most current and accurate depending on when it is accessed.